Over half term, the boy and I hot footed it up to York to check out the Jorvik Viking Festival. We went last year and had a tremendous time, but we’d missed a few things and needed to remedy that. Top of our list was a visit to Jorvik DIG. DIG is a hands-on archaeological adventure which gives kids the chance to try their hand at archaeology and discover some of the most exciting artefacts from over 2000 years of York’s history. 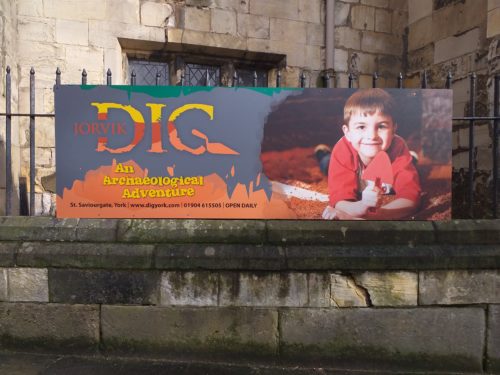 Jorvik DIG is located in St Saviour’s Church, a former Church of England church which was declared redundant in 1954 and later taken over and transformed into DIG by the York Archaeological Trust. DIG is part of a group of historical attractions in York which include the Jorvik Viking Centre and Barley Hall.

During the Jorvik Viking Festival, there’s such a lot going on in York, and local attractions put on extra events. DIG is no different, during the half term there were extra sessions, including the chance to make your own Viking poo (out of clay; but adding seeds, fish bones, worms and all kinds of grim things).

DIG advise that during weekends and school holidays, it’s best to book ahead. We didn’t do this, but we struck lucky and managed to get a slot later that afternoon; so we retired to a local café for lunch, which suited us just fine.

After lunch we went back to DIG and had a look around the upstairs, which was where the poo making workshop was. There was also a small play area for younger children. Downstairs there’s a hands on museum area where you can learn more about archaeology, how they date artefacts and you can look at some of the things which have been found in and around York. There’s also a replica Viking longboat, which is well worth a look at. 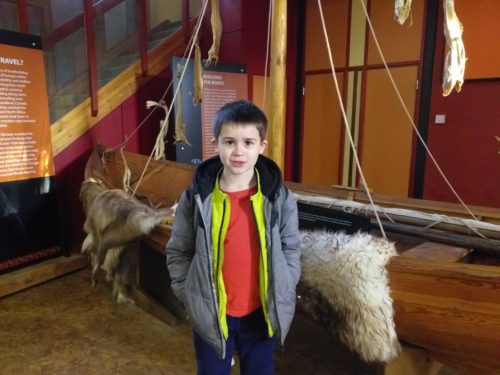 The big attraction was the tour, which is hourly. We were led into a room where a very knowledgeable guide talked to us about archaeology and about the kinds of things archaeologists do and look for. The children were then all given a trowel and we were introduced to the DIG Excavation Pits, which they were invited to excavate.

There are four pits; Roman York, Viking York, Medieval York and Victorian York. Each pit is based on excavations that have carried out over the past 30 years in York. Scraping back the sand and soil, you can unearth the remains of walls, pottery, shells and much more. The children get a good amount of time to dig away and see what they can find, and it’s all good fun. 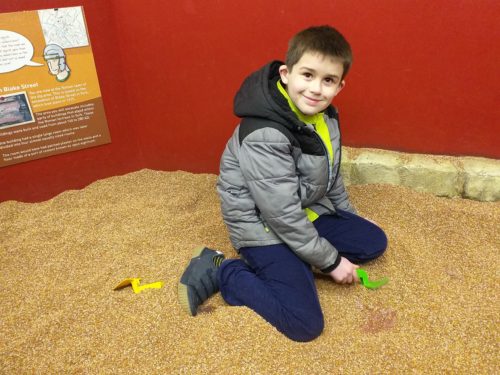 Next we were led to a large table with boxes of artefacts; each family was asked to sort a box into categories; bones, shells, antlers, rocks, metal etc. We did fairly well at this, and all the while the guide was talking us through the things to look out for. We were also given a box of bones and asked to try and identify the animal they came from.

We were at Jorvik DIG for a good couple of hours. I was glad of it as it was an indoor attraction in the middle of a stormy February day. The boy had a great time and despite being sometimes reticent about joining in with things, he had a good go at everything put in front of him.

If you’re visiting York and taking in the historical sights with children; a visit to DIG is well worth the money. It does lack a café, but it’s only a couple of minutes away from several very good ones. The tickets are priced at £6.50-£7 per person, family tickets are available and your ticket is valid for a year; meaning you can return as often as you want.

For more information on Jorvik DIG, visit their website. 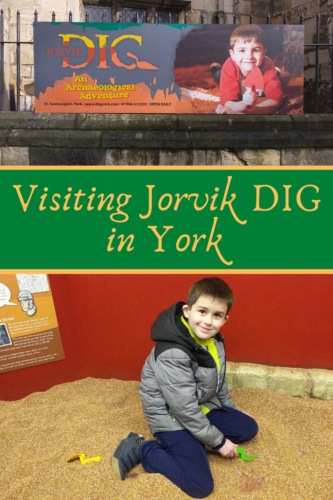 We paid for our tickets in full.