Since Pip Ahoy burst onto our screens in 2014 the small boy has been fascinated by the goings on at Salty Cove. For those who haven’t yet seen Pip Ahoy It is all about the adventures of Pip the puppy, and his friends including kitten Alba and Alan the penguin (Alan is our favourite)  in the seaside town of Salty Cove. Pip Ahoy features the familiar voices of David Jason, Stacy Soloman, Teresa Gallagher and Jimmy Hibbert.

Pip Ahoy is aimed at pre-schoolers and is shown on Milkshake (Channel 5) and on Cartoonito. The boy makes a special effort every morning to get up and watch it while he has his breakfast, so we treated him to a copy of the latest Pip Ahoy DVD – Welcome to Salty Cove. He was delighted!

Welcome to Salty Cove contains all 13 episodes of Pip Ahoy season 1 and is 2 hours and 23 minutes long. It’s a long DVD for a pre-schooler to sit and watch in one go, but you can pick and choose the episodes you watch so you can mix it up each day. We watched it over a few days after school and it was nice to sit and snuggle up together.

Pip Ahoy is a brightly coloured cartoon with easy to follow story-lines which are all about friendship and kindness. It’s lovely heartwarming stuff and Pip, Alba and Alan are very popular (I work in a toy shop, I should know) and the songs in the series are brilliant and make fantastic earworms – we’re still singing the penguin song from the Christmas episode!

As always there’s lots going on in Salty Cove, the episodes are so bright and cheery too. With any series there are always favourite episodes which are watched over and over again, I like “Anybody Seen Alan?” where he bounces off the see-saw and off into adventure; the boy loves “The Rocktoppus” where a drumming octopus loses his drumsticks and it ends with a brilliant underwater gig. 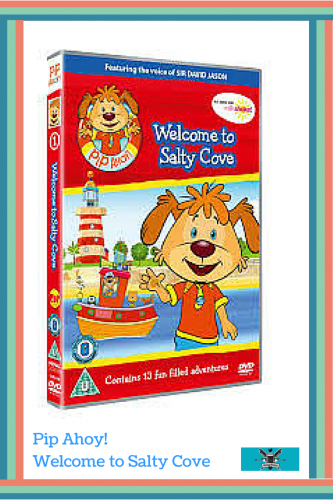 The DVD also comes with a free A3 activity sheet to colour in, do a dot-to-dot or spot the difference. The Pip Ahoy DVD Welcome To Salty Cove

is available from Amazon and a range of other retailers for around £7.99. 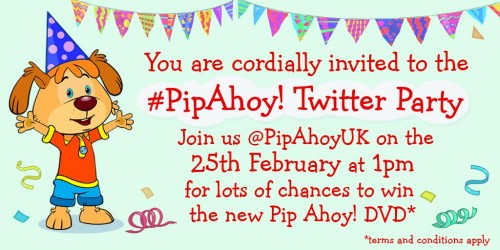 I will be taking part in the Pip Ahoy! Twitter party on Thursday 25th February from 1-2.30pm. Pip Ahoy! will be giving away 20 copies of the Welcome To Salty Cove DVD to some partying Pipsqueaks. Use the hashtag #PipAhoy to join in.