Biscuits. They’re the parents friend. Providing much needed energy to get through traumatic children’s bedtimes, afternoon energy lulls and for scoffing greedily with friends over a cup of tea. They’re also excellent for staving off the pre-dinner starvation which the small boy seems to get around 4.30pm.

It was not with undue levels of excitement that we opened a box of biscuit awesomeness sent by Bahlsen. They make a much admired and rather too moorish biscuit; you know the sort, plain biscuit one side, and a thick slab of chocolate on the other. It’s impossible to take just one of these out of the packet and leave it at that. Impossible.

We were given our mission (which we chose to accept) which was to take part in the Bahlsen Bake Off. The small boy loves helping in the kitchen, especially making cakes. Alas I am not gifted in the arena of baking, so my specialty pud is usually an Eton Mess, it’s basically an assembly job of all my favourite things, cream, broken meringue and strawberries.

For ease we prepped the component parts beforehand; whipping the cream into stiff peaks, smushing up the meringue and cutting the strawberries. At this was the Bahlsen Bake Off we added nearly a whole packet of the Bahlsen Leibniz Zoo biscuits which we broke up and mixed with the meringue.

We then set to work, you can see what we did in this short, pretty cute video. What do you think of our budding chef? 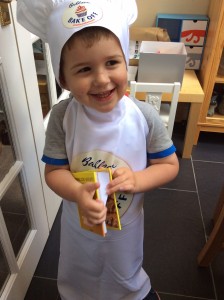