Back in March this year I conduced a little experiment with Facebook. Dear old Facebook had been imploring me for months to try paying to “boost my posts”. I have a little over 2000 people who like my Facebook page and routinely everything I post on these gets very little attention, this is largely due to the algorithms Facebook uses to limit the content people liking pages will see and also to encourage page owners to put their hand in their pocket.

I was running a lovely little competition to win a limited edition print of a cartoon, it was a great prize but for some reason my competition wasn’t as popular as I hoped it would be. I looked at the stats on Facebook, it had been shared to only 67 people out of around 2000 followers. That’s pretty depressing. So I decided to see if paying for Facebook advertising was really worth it.

I paid £3 to boost my post over three days, ok so that is pretty cheap, but I didn’t want to go in high and waste my money. 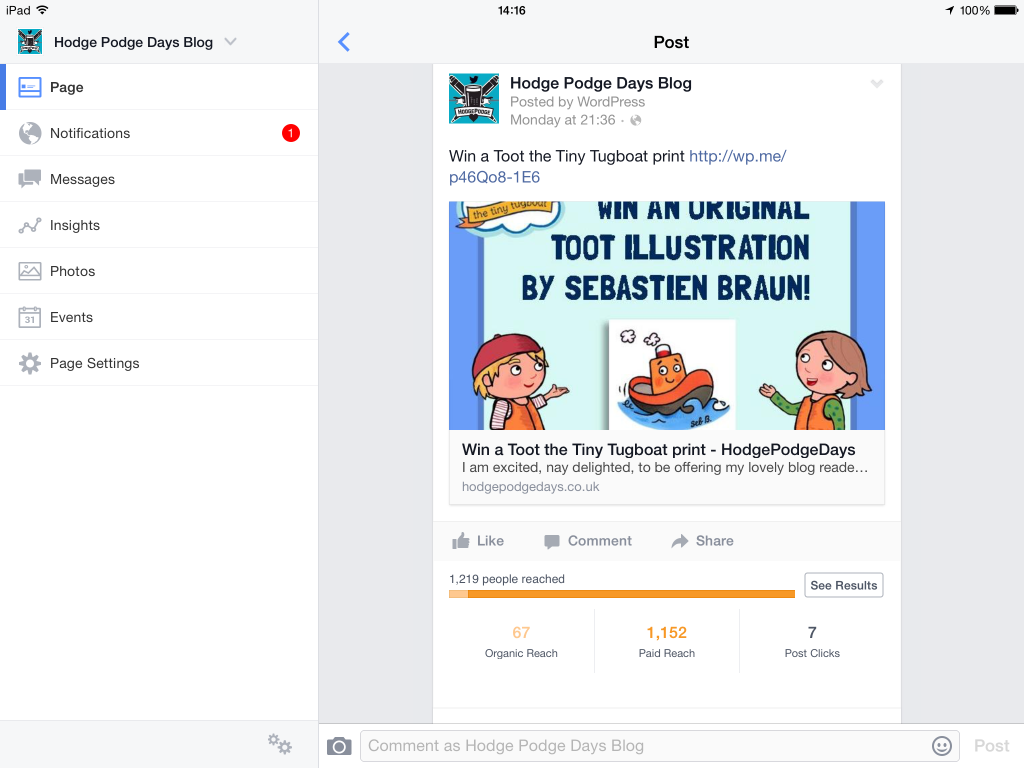 The Facebook advertising ran for 3 days and apparently over those three days paying for it meant that it showed up a fairly impressive 1,152 times in peoples timelines. Am I impressed though? No. Why not? I hear you ask, well firstly it showed up in my own timeline several times each day, which just felt a little spammy for my liking, and it was my post!

Also, I’m not convinced by the accuracy of their stats which seemed to suddenly rocket in the final hours of day three, so I suspected a bit of creative accounting had taken  place to make the Facebook advertising seem more effectual than it actually was, though I can’t prove it, it’s just a hunch.

What else didn’t float my boat? Well my advert had 1,219 “impressions” in total and it only had 7 clicks. Firstly the idea of impressions makes me mad, I don’t really want Facebook to show the same thing to the same person 10 times, I want more people to see it once, twice tops. And 7 clicks? Really? I suspect at least half of those were before I’d boosted the post in the first place.

My rationale for boosting my post and buying some Facebook advertising was to generate additional clicks on the link and more entries into the competition I was hosting. I wasn’t looking to increase my page likes, but that would’ve been nice too. Generating just 7 clicks and no engagement or interaction was beyond disappointing.

My conclusion: I paid £3 for 7 clicks to my blog which seems pretty darn expensive. I also felt like Facebook had maybe spammed some people on my behalf, which could potentially lead them to unfollow or unlike my page, which is the very opposite of what you want to happen. Would I boost a post again? It’s unlikely. Unless they iron out the spaminess, sort out the accuracy of their statistics and do something to improve click throughs etc, it’s probably just a big old waste of my money.

Have you used Facebook advertising? Have you had great success and have I just been unlucky?