This week we have been trying out the Gousto recipe kit boxes. We were sent a voucher code which got us a two meal box for two people to review. We have had and paid for Gousto boxes in the past, so we knew what to expect.

When you order your Gousto box, you choose from the meals they have on offer that week. They have a broad range of recipes to choose from, all include nutritional information and have estimated cooking times. I’m a vegetarian and there were several interesting meal kits to choose from. I chose the Lentil Veggie Pie and the Egg Fried Vegetable Cashew Stir Fry.

You can choose 2 or 4 portion options and they will box up virtually everything you need and deliver it to you. The ingredients they don’t include tend to be standard store cupboard things like salt, pepper and cooking oil. 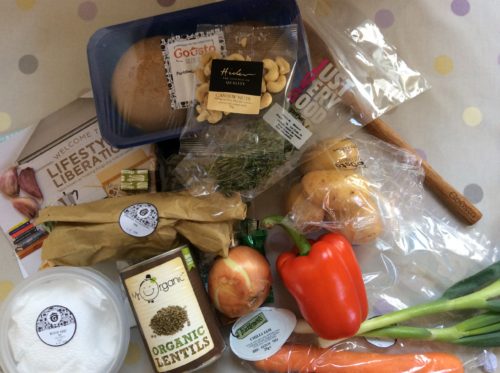 My box arrived in great condition, it was packed with a cool pack and everything was fresh and vibrant. As I unpacked the box I checked everything off against the recipe card included. The recipe card for the stir fry had not been put in the box, so I tweeted Gousto and they sent me the link. Almost everything I needed for the lentil pie was there, save for the lettuce and the cheese. I’d not been able to check if everything for the stir fry was included. I discovered later that I was missing several key ingredients.

The contents of the box, when stored correctly are good for up to six days. The day after the box arrived I decided to cook the lentil pie. I followed the instructions and put the pie together. I did end up adding some extra seasonings to boost the flavour – specifically mushroom ketchup and some chilli sauce. The box was also missing the cheese and I’d been sent 300g of potatoes and not the 400g specified in the recipe, so I had to use additional spuds. I was a little disappointed at this stage. 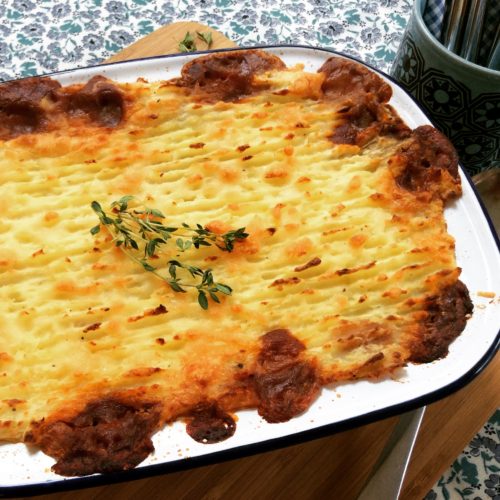 Thankfully the lentil pie was an absolute triumph. It was utterly, utterly delicious. The portion size was more than ample for two people and even stretched to feed my six year old son who thoroughly enjoyed it too. We will be making this again!

A few days later I wanted to throw a quick dinner together. I opted for the Egg Fried Vegetable Cashew Stir Fry. Using my iPad I looked at the recipe Gousto had sent me online and quickly realised I was missing both the rice and the honey. At this point I got a bit cross, but I had some basmati rice in the cupboard, but no honey which I had to substitute for agave syrup.

The recipe called for “fragrant basmati rice” and I wasn’t sure if the rice they should have sent would have included any flavourings or whatever, so I threw one of my own vegetable stock cubes into the rice as it cooked and hoped for the best. I followed the simple recipe online and produced a tasty stir fry. I very much enjoyed it but felt it needed more protein and next time I would have used two eggs instead of one. Or perhaps induced some tofu. 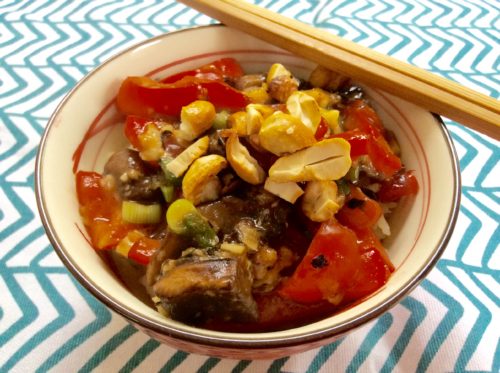 It was a good stir fry and I enjoyed the crunchy cashews on the top. If I were to make it again I would change a few little things, more egg, some tofu, fractionally less chilli heat.

All in all I think I got a bit of a dud box. I was disappointed that so many key ingredients were missing. If I’d had the recipe card when I’d received the box I could have checked, but I’d trusted that everything I’d need, everything that was key to the recipe would be included and it wasn’t. I’d be pretty disappointed if I’d paid full price for the box and found so many things missing.

One other thing to note is that side dishes aren’t included. The lentil pie was just the pie. Any extra vegetables or accompaniments you might want on the side you will need to provide yourself.

We have had Gousto boxes in the past. Last year my husband really wanted to cook some nice interesting meals for us. He tried a Gousto box for about six weeks and we really enjoyed trying new things and being a bit more creative with our meals at home. This is why this time I think I got a dud box, we’ve always been happy before. 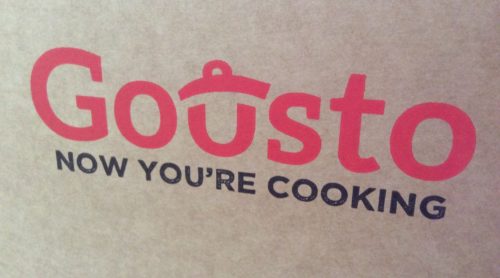 A Gousto box costs from £27.49 with free delivery. The cheapest box is for two meals for two people. It is not an inexpensive way to eat. But it is the kind of thing I would order if I was in a cooking rut and needed some inspiration, or if I were going on a self catering holiday and wanted some nice meals for a few days. It’s not something we can justify on a weekly basis, for us a Gousto box would be a treat.

Despite my disappointment with my last Gousto box, I would say that we almost certainly will order them again in the future. Like I said, falling into a cooking rut is a regular thing. I often cook the same family meals over and over until we are all bored stiff of them. A Gousto box is a great way to liven up your meal times. But you do really need to double check that they’ve sent everything they should have.

Grab a £20 discount on each of your 1st and 2nd Gousto orders, on any sized box, meaning the 1st & 2nd boxes could cost £7.49 each. The discount code to use is TORNADO. You can find out which meals are available this week on the Gousto website. Enjoy!

Disclaimer: I was sent a voucher code to purchase a Gousto box, all images and opinions are our own. We were not been compensated for this blog post.