This afternoon we are taking the small boy to hospital for a consultation about his glue ear. Almost exactly two years ago he had his first operation to have grommets put in his ears to alleviate the problem. At the time it was very apparent that he was starting to struggle and fall behind his peers, even at the tender age of 3.

I remember him coming round from his anaesthetic, he started chattering away and he’s not stopped since. In the months following he seemed to come on in leaps and bounds, making up for lost time and we looked forward to a problem free future for him.

Regrettably that was not to be. About a year after his operation we suspected that he was starting to struggle to hear again and his ear infections, caused by the glue ear were becoming more frequent. Thankfully he was still having regular-ish appointments with ENT and following a hearing test last year they said they needed to keep an eye on him.

In December they tested him again and he had “significant hearing loss”, they sent us away to consider our options. Really there are only two options; let him suffer repeated infections, pain and discomfort as well as see him struggle at school, or have new grommets put in and his tonsils and adenoids taken out.

Today we go to the hospital to speak to the consultant. Yes we’d like him to have the operation please. Yes can you do it asap please. Yes we understand the risks and yes we’ve both tormented ourselves over making this decision. It doesn’t make it easy and it’s not something any parent wants, but we know that he needs this to be done. I just hope this will be an end to it for him. Poor lamb. 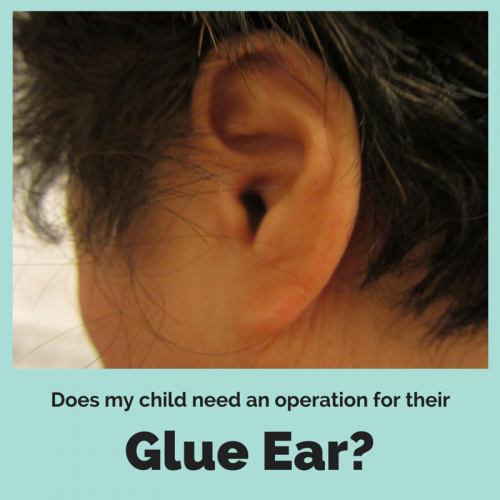