I had my first freakshake in Manchester’s Northern Quarter a few years ago. It was an insane hybrid of a lovely milkshake and a lot of booze. They are quietly lethal and a bit of a treat. When I knocked up a lovely batch of Guinness syrup a little while ago, I knew it would be perfect to make a freakshake with, it has all the complex bitter, stouty flavours of Guinness, but in a sweet form which makes it perfect for cakes, bakes and freakshakes! Mixed up with some rum, you get an insanely good Guinness and Rum Freakshake.

To make your freakshake you will need a blender. I have a nutribullet which has sat gathering dust for a few months, and this is perfect for making freakshakes in. It’s not the healthiest use of a nutribullet, but it’s probably the best! 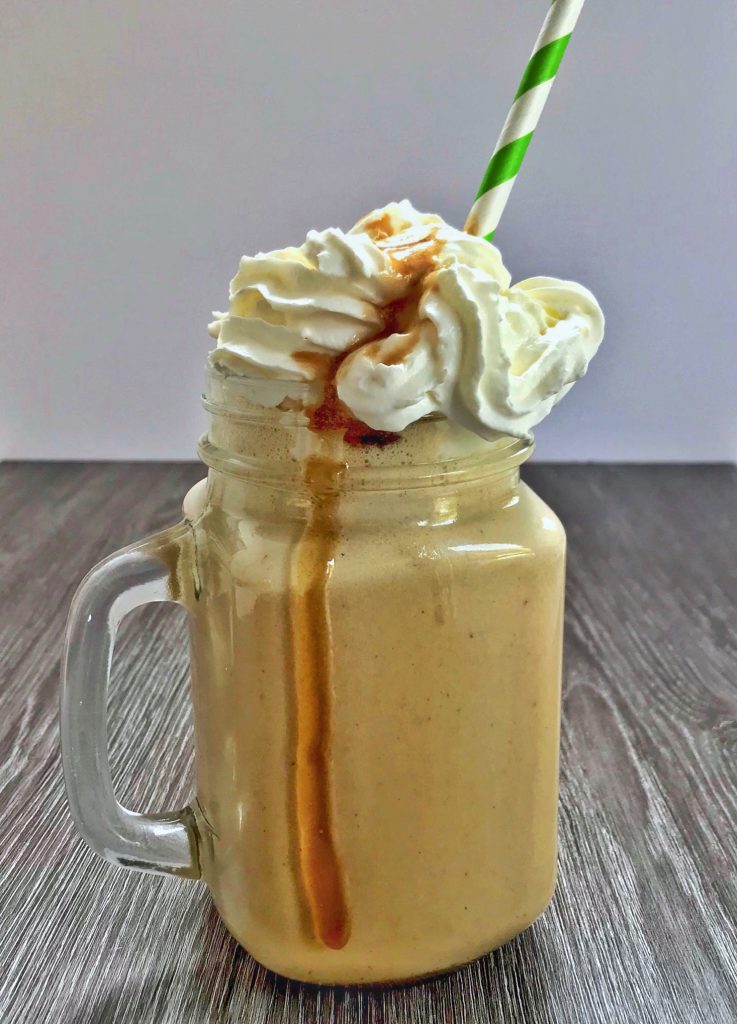 This Guinness and Rum Freakshake is very loosely based on the Guinness Martini, which is made with dark rum, cold espresso coffee, vodka, crème de cacao and Guinness. This freakshake is really fun and absolutely not for children!

Method:
Put it all of the ingredients in a blender and whiz up for a minute. Take a spoon and taste it, you can add more rum, Guinness syrup or coffee if you think you need to. Pour it into a glass and top with squirty cream and a drizzle of Guinness syrup. 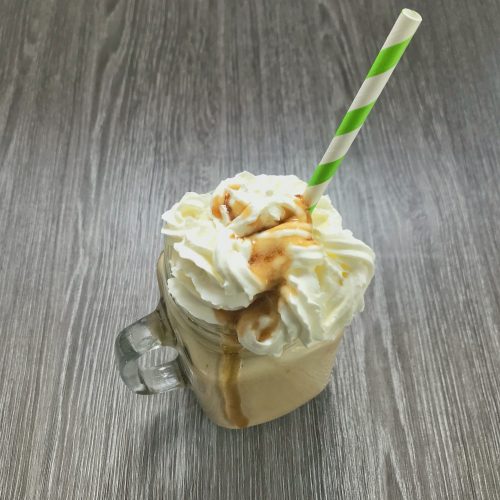 If you don’t have any espresso, you can swap this out for some instant coffee mixed with a shot of boiling water. Make sure you cool it before you add it to the Guinness and rum freakshake.

This recipe makes enough for one large Guinness and Rum Freakshake, if you’re making more than one, just double up the ingredients as necessary. 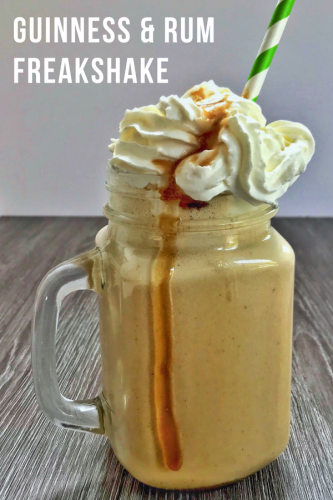 A few weeks ago I had the idea for this Guinness Cheesecake. Given that I’d never made a cheesecake before, I knew it would take some thought, planning and possibly a couple of failed attempts that would end up in the bin. I read a lot of recipes and a lot of advice about how to bake the perfect cheesecake. Then I went and did things my own way.

Most people use digestive biscuits as their cheesecake base, but my Guinness Cheesecake needed something darker, so I opted to use bourbon biscuits instead. How was I going to turn a plain vanilla cheesecake into a Guinness Cheesecake? I needed to make a thick batch of Guinness syrup and spoon that over. This cheesecake would take a few days to make fully from scratch, what with needing to make the Guinness syrup first, but boy, was it worth it. It’s the best thing I’ve baked in ages! Whiz your bourbon biscuits up in a food processor until you have fairly fine crumbs. Add your tablespoon of Guinness syrup and melted butter and whiz through again.

Grease a springform tin, I used a 30cm one. Press your biscuit crumb mix into the bottom of the tin. Make sure it’s evenly spread and well-packed. Pop the tin in the fridge for half an hour to firm up.

In a large mixing bowl, beat your cream cheese, then add the sugar, vanilla essence and lemon juice. Add the eggs one by one taking care not to beat them too hard, you don’t want to create air bubbles in your mix.

Take your base out of the fridge and wrap the base of the tin in foil, some mix may leak out so it’s best for your tin to have a foil “nappy” to catch the drips. Put your springform tin on a baking tray too, it just makes it easier to take out of the oven.

Bake for an hour. Keep an eye on it and keep the oven door shut as much as you can. Once the cheesecake has risen all over (mine had a dip in the centre until right near the end), turn your oven off and leave the door shut. This will stop your cheesecake from cracking. Leave it as long as you can, after half an hour I opened the oven door a fraction and I left it overnight to cool fully before decorating.

Carefully remove the cheesecake from the tin and put it on a large plate or whatever you’re going to serve it on. You ideally want something with a bit of a lip to catch any syrup which slips off the cheesecake. Depending on the consistency of your Guinness syrup, you may want to re-boil it until it goes thick like a slightly spreadable toffee. If you do this, make sure it’s more or less cool before you pour it on your Guinness Cheesecake. This Guinness Cheesecake is a real beauty of a cheesecake. It’s the perfect celebration cheesecake and it’ll feed an appreciative crowd. The Guinness is both sweet and savory at the same time, and it has a wonderfully bitter edge. It’s a fantastically grown up cheesecake which is so good, even my son approves of it. Recipe: How to make Guinness Syrup

Why would you want to make Guinness syrup I hear you ask? My answer? Because it’s completely awesome, that’s why. This lovely syrup has a surprising number of uses; it’s pretty simple to make and it has all the complex bitter, stouty flavours of Guinness, but in a sweet form which makes it fabulous for puddings and cocktails.

I have many plans for my Guinness syrup, so do keep your eyes peeled for recipes in the coming weeks, but first, let’s make a batch ready to be drizzled over pancakes, stirred or shaken into cocktails and even baked into cakes. How to make guinness syrup

Method:
Tip your Guinness and sugar into an enamel pan or a preserving pan, stir carefully with a wooden spoon on a gentle simmer until the sugar has dissolved.

With the lid off the pan, and stirring frequently, gently simmer the liquid for at least an hour. I simmered my syrup for nearly 2 hours until it reached a thick pouring consistency, slightly looser than golden syrup. Depending what you need your Guinness syrup for, simmer it until it’s the syrupy consistency you need.

Make sure you have a couple of squeaky clean jars or bottles which have been sterilised ready for your syrup. To sterilise your jars, put your clean jars in a low oven for at least half an hour. Carefully remove your jars from the oven (they will be incredibly hot) and pour in your syrup. I suggest you use a jug and a funnel for this. Work quickly and carefully and get the lids on your jars while everything is still hot. Leave your syrup to cool overnight and it’ll be good to go in the morning.

How will use your Guinness syrup? I think it’s got so many possible uses, but drizzled over plain vanilla ice cream would be a pretty good start!