This week we were sent the brand new not yet available in the shops Hatchimals CollEGGtibles Mystery Puzzle to play with and review. I had no idea my son had even heard of Hatchimals until he spied the box on the table and got all excited that he’d been sent one to play with.

Until now I’ve slightly avoided Hatchimals because I didn’t think he’d be into them and I thought he would think they were too girlie. It turns out I was wrong and I need to stop second guessing him. 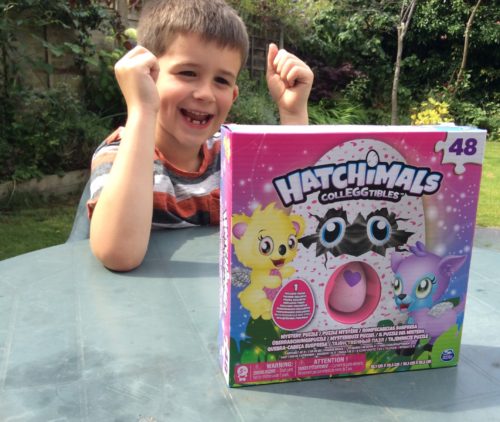 People have been going mad over Hatchimals CollEGGtibles since before Christmas. Most kids seem to like blind bags of things they can collect. These are like blind bags, but they come in the eggs which you have to hatch, so it does add a bit more to the blind bag experience.

To hatch the egg you need to rub the purple heart until it turns pink, then press your thumbs above the heart to crack the egg open to reveal the Hatchimal inside. The Hatchimal itself is a small plastic creature, ours looked like a yellow koala with silver wings. Once you’ve cracked the egg open, there’s a perforation line at the bottom, so you can peel the eggshell away and leave the bottom of the egg to display your Hatchimal in. 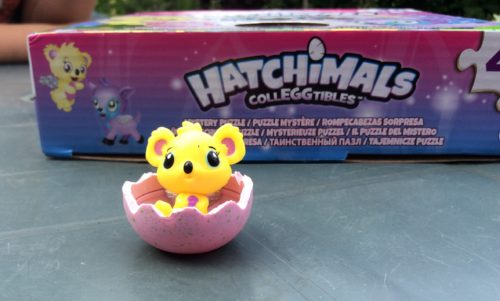 Also in the Hatchimals CollEGGtibles Mystery Puzzle was the 48 piece mystery puzzle. I think the mystery element is that you don’t know which Hatchimal will be on the puzzle. Ours matched the Hatchimal in the egg and was the little yellow koala with wings.

The puzzle itself isn’t overly challenging for the age range it is aimed at. The pieces are a large size and it’s reasonably easy to put together. With the puzzle we had there were large expanses of yellow, which made figuring out which yellow piece went with another yellow piece a bit trickier. But it’s all good clean fun with a hint of developmental activity. 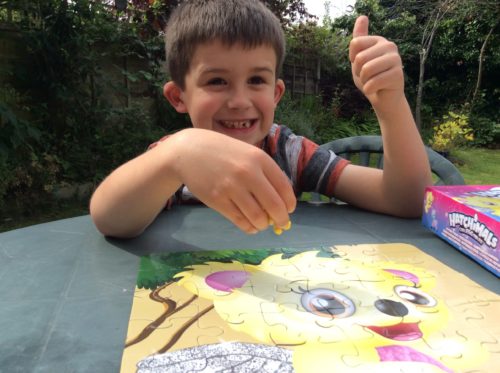 The Hatchimals CollEGGtibles Mystery Puzzle costs £6 which I thought was a good price for a Hatchimal and a jigsaw puzzle. Hatchimal eggs cost £3 each, so £6 for the egg and the puzzle seems like a good deal to me.

The Hatchimals CollEGGtibles Mystery Puzzle isn’t yet available in the shops but will be out soon (I’ll update this blog post with a link when I can). At £6 this would make a great birthday present for Hatchimals fans; my six year old seems to be the newest and most enthusiastic Hatchimals fan in town!

We were sent the Hatchimals CollEGGtibles Mystery Puzzle for review purposes. All images and opinions are our own.