Earlier this month it was the small boy’s birthday. He’d asked for and got a train party and much to his eternal joy, a good 80% of his birthday presents were train related. One of his many presents was the Thomas & Friends Safe n Sound

Lumiglow vinyl night-light. We’d recently acquired the Thomas & Friends Go-Glow Night-light, which he loved and we thought he’d like this too. 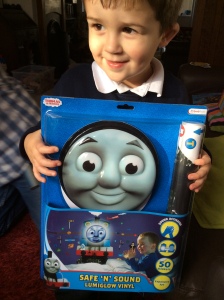 The Thomas & Friends Safe n Sound Lumiglow vinyl night-light is made by Worlds Apart and costs around £20. You get a sheet with 50 easy peel and apply vinyl stickers, including a big Thomas sticker and a battery operated Thomas face which lights up when you clap near it.

There are 50 stickers of all different kinds, including,  train track, the Fat Controller, Harold the Helicopter, signals and sayings as well as Toby, James and Percy. They provide a suggestion for how to lay it out, but like us, you can arrange your stickers however you want.

The stickers are really easy to apply. You just peel them off the backing and stick them on the wall. A few times I stuck them on in the wrong place, but they easily came off the wall and re-applied elsewhere. I was expecting the big Thomas sticker to be difficult to stick on the wall and bubbly underneath, but I smoothed it on a treat and there are no bubbles. I was impressed. 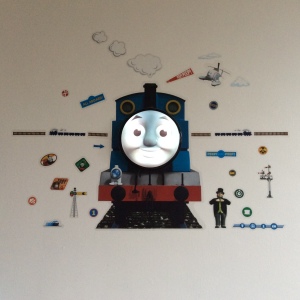 Once all of your stickers are where you want them you can stick the Thomas face on the Thomas sticker. You need 3 AAA batteries to power it, and it comes with sticky fastenings to stick it to the sticker. It looks great when it’s up.

To make Thomas’ face light up all you need to do is clap near it and it will light up for two minutes. I think this is a great idea, especially for those times in the night where you need a bit more illumination than normal. Or if you’re a small boy and need the comfort of having a light come on quickly if you’re afraid of the dark.

The stickers are bright and cheery and the whole thing has made a nice centrepiece in his bedroom, which previously was white walls with just a few pictures and posters. We’d been meaning to brighten it up for a while now, and this was just what his room needed.

He loves his new addition and really enjoys clapping to make it light up and looking at and pointing out all the details on the stickers.  He is completely obsessed with Thomas and is genuinely delighted with the new light. It was a brilliant birthday present and it would definitely make a cracking Christmas present for any Thomas fan.

Note: We were sent the Thomas & Friends Safe n Sound

from Worlds Apart for review purposes. All images and opinions expressed are our own.

The small boy has always been a sound sleeper, he’d nod off with no problems until we went on holiday in September. Since then he’s been unable to sleep in the dark, this has made bedtimes quite stressful. We didn’t know why his bedtime behaviour has suddenly changed, so we’ve gone along with his fully illuminated at all times request.

The night-light is mains powered which charges the torch, you can lift off the torch and take it to bed with you, or explore the house. Small children are quite obsessed with torches, so this initially was the most fascinating feature. Once he’d got used to the torch and night-light he loved having Thomas & Friends watch over him at night.

The GoGlow Thomas & Friends Night-light is suitable for children aged 12 months and over and has an easy tap on and off function. It’s solidly made and looks able to withstand the rigours of being owned and used by a child, but with most things like this it’s wise to tuck the cabling away and make sure they can’t play with the plug socket and so fourth.

The GoGlow Thomas & Friends Night-light is lit at the front so Thomas is illuminated, there are a few star cut outs where the light shines more brightly out. It’s bright enough for us to creep into his room to check on him without putting any other lights on, but not bright enough to keep the whole house awake at night. It’s a good solution to the sleep in the dark problem, especially for a Thomas fan.

The GoGlow nightlight is available in a pretty large range of popular characters including Peppa Pig, Spider-Man, In The Night Garden and My Little Pony. We chose Thomas because he’s pretty obsessed with trains. The night-light costs around £20 (currently available from ASDA, Argos, Smyths Toys, Homebase etc) which I think is a good price considering it’s both a torch and a night-light and it’s fully Thomas & Friends branded.

GoGlow have recently surveyed 1000 parents of children under the age of five, 67% of children were afraid of the dark, with their fears increasing when the clocks change in October and it goes darker earlier.

Seven out of ten parents make a special effort to walk around their child’s bedroom to prove there are no monsters hiding.  With three quarters of children getting out of bed to seek reassurance from their parents, the survey went on to find that children felt that night-lights were the most reassuring solution that helped stop scary shadows.

I know having a night-light has helped the small boy sleep better at night. We really do recommend GoGlow night-lights if your child is afraid of the dark. It really has made a big difference to our bedtime routine and he’s back to sleeping through again.

Note: We were sent the GoGlow Thomas & Friends Night-light from Worlds Apart for review purposes. All images and opinions expressed are our own.