As the mother of a 5 year old child it’s fair to say that most of his weekends (and consequently our weekends) are taken up with various birthday parties. These days class protocol dictates you find one or two children with birthdays in the same month and throw a joint party. This cuts down party costs for the families of the birthday boy or girl and means that guests only need to buy one present (which will be divided up between the birthday children).

Last year parties tended to be whole class affairs, but this year the boys and the girls have largely split up into smaller friendship groups. Soft play is still very popular, trampoline parks are on the rise, but for the boys in Ben’s class, the big dream is a Legoland Manchester birthday party.

Having a Legoland Manchester birthday party is what most of the boys in his class want. A few weekends ago we went along to a party to celebrate a couple of his classmates turning 5. 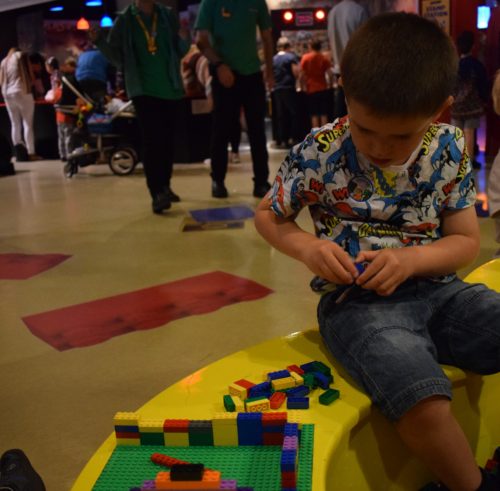 Each child who attends gets to take an accompanying adult, so it is in many ways like a normal visit to Legoland. You go in and the group has their photo taken and you head up to the “factory tour” which is always entertaining. Once you’re through that it’s onto the Kingdom Quest ride (my favourite bit) and then on into the discovery centre itself.

When we went, all the kids raced through Miniland (past Blackpool Tower and other attractions made from Lego) and straight through to building the Lego racers. The parents grabbed a coffee (party entry came with a voucher – a godsend!) whilst all the boys got stuck in. After around 45 minutes we were summoned to the party room where the kids tucked into a lunch of sandwiches, crisps, fruit and juice. 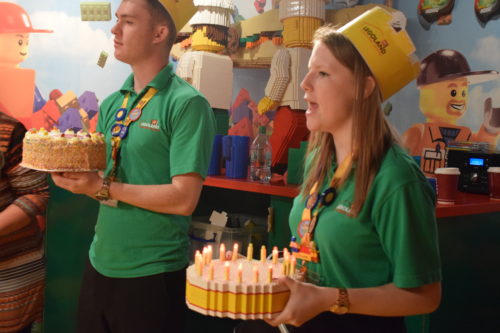 It was time for some party games. There were two hosts from Legoland who were really engaging and professional. They kept the party flowing nicely, an eye out for any health and safety issues the parents might have missed and they were great at getting all the kids up and involved in the party games. Think musical bumps, musical statues that kind of thing – great fun and the boys all had a great time.

Then the cake came out. Legoland provided the cake, though I guess you could bring your own if you wanted. It was one of those rainbow cakes, different coloured layers sandwiched together with buttercream. It was really, really pretty (I now want to bake one) and it was a good cake; light and moist. I liked it a lot, almost as much as the kids. 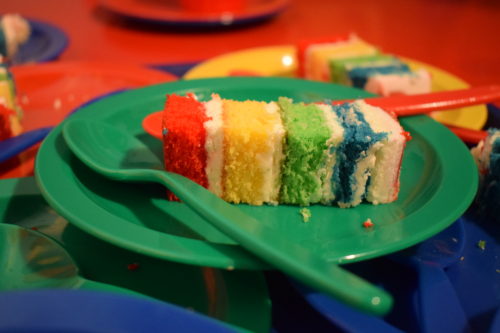 After we’d all eaten our colourful cake, everyone queued up to go on the Merlin’s Apprentice Ride and then it was time for everyone to say goodbye.

It’s worth noting that once the party is over you can stay for as long as you’d like afterwards. We stayed for a little while, enjoyed the Fire Academy (soft play area), headed to the brand new Lego City Builder area for a while and then for an obligatory turn around the shop (I might have bought MYSELF some Lego). 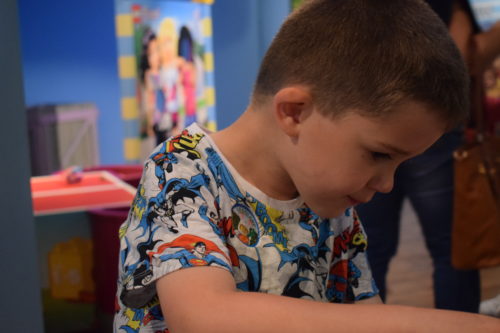 As something of a kids party veteran I can say that I thought the Legoland Manchester birthday party was well run, efficient and the boys had lots of fun. I think it is a nice touch to offer parents a coffee and leftover cake and sandwiches. I like the fact that once you’re in you can stay for as long as you want afterwards too. The food was good, the cake was great and there is very little organisation and input required for the parents throwing the party.

Prices per child are £17.50/£22.50 depending on when you go. Whilst this is not cheap, I do think that is does represent good value for money, especially as you can stay until it closes if you want and enjoy all of the attractions in Legoland Manchester.

Packages for a Legoland Manchester birthday party currently start from £17.50 per person (£22.50 at weekends) and more details can be found on their website. 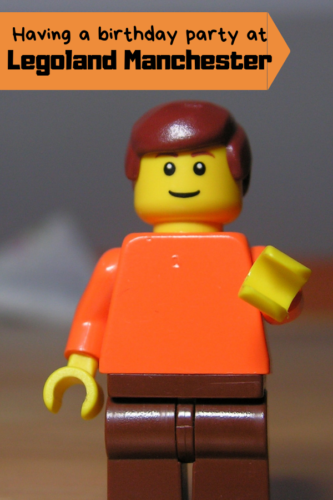 Note: We were attending a party of a classmate and I thought I’d write up the party experience.