As a northerner I enjoy a gravy dinner, preferably with a dollop of buttery mashed potato. When it comes to mashed potato it has to be smooth and lump free, but not bashed into a gluey inedible mess. I was intrigued when I was asked to try the Sensio Potato Masha from The A Range. I’ve been mashing my spuds for years with a traditional masher and wondered how they would compare.

I unpacked the Masha, it is a stick blender type of thing which comes with two plastic “blades” one for mashing and one for aerating. The blade is housed in a head which has lots of little holes which the mash is forced through, and as a result comes out smooth. It’s easy to hold and use and perfect for my 5 year old when he wants to help Mummy in the kitchen. 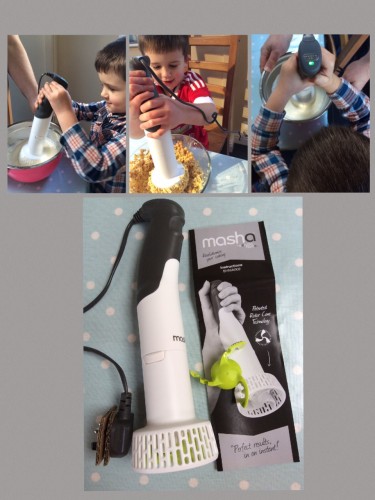 The Sensio Potato Masha comes with an instruction book which includes some recipes, we decided to try making hummus as were having Greek mezze for tea. The small boy was as keen as mustard to get his hands on it, I explained that he wasn’t ever allowed to touch the green plastic blade whether it was moving or not – it’s not sharp so he couldn’t cut himself, but if he touched it while it was moving it would hurt.

Once I showed him the button to press, he got busy making hummus. As I gradually added a little more oil, the mashing process became easier, the smooth hummus coming out of the holes in the Masha head.

Next up,  I’d detached the head, took the blade out and gave it a quick turn in the dishwasher, it was time to whip some cream with it. Using the aerator blade the boy was super keen to help out again (top tip: gadget = helpful boys). Once I’d explained that he needed to move it around the bowl to whip all the cream it took less than a minute to get the right consistency I was after.

I was very impressed by the Masha. I have an old stick blender which has served me well but this is much more versatile. I’d never “blend” mash as I’ve always found blended mash to be gluey and having tried this out on a range of different things in the kitchen I really like it. I really like that its easy to hold and use and although kids in the kitchen should always be supervised, my heart is less in my mouth when my son uses this compared to my ancient stick blender with its sharp metal blade.

I like that the Sensio Potato Masha is chunky and easy to clean. You just take it all apart and put everything apart from the power unit into the dishwasher. It’s great for people who find fiddly things more difficult to use and it’s really simple to take apart and put back together.

I think it’s time I retired my ancient stick blender, this is quick to use and easy to clean and I know the plastic blades won’t get blunt in the dishwasher. The Sensio Potato Masha costs around £35 and is available from a range of retailers. I think that because it can tackle a range of smashing, mashing, whisking, whipping and blending tasks in the kitchen that it is really good value for money.

The Sensio Potato Masha gets a thumbs up from us.

We were sent the Sensio Potato Masha for review purposes, all images and opinions are our own.