I spent most of last weekend sat in a jacuzzi with some good friends, drinking fizz and generally having a good time. I’d left the boys at home for the weekend with a list of chores and no expectation they’d do any of them. I was right, they did this instead…

Mrs. HodgePodgeDays decided to go away for the weekend, so that left two boys at home wondering how to pass the time. It was fortunate that amongst other things, we had been invited to try out the brand new Team Santa vs Team Elf MCFC Stadium and Club Tour at the home of Manchester City FC, the Etihad Stadium. 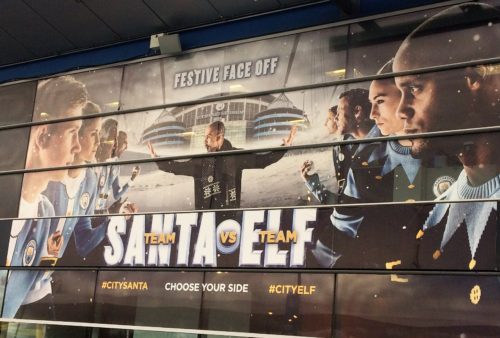 The new festive themed MCFC Stadium and Club Tour launches on Saturday 10th December. Families are invited to enjoy a City Santa vs City Elf themed tour with a sprinkling of Christmas spirit. We went along to get a sneak preview of what Santa and his footballing elves had in store this December.

The MCFC Stadium and Club Tour includes exclusive access to fascinating behind the scenes areas of the stadium, including the team dressing room and the official press conference room where you can sit in Pep Guardiola’s seat, exactly as seen on TV. From here, visitors emerge pitch side through the players’ tunnel before taking their seats in the dugout and dreaming of the moment they’re called upon to wear the famous sky blue jersey. The Christmas tour is all that and more. 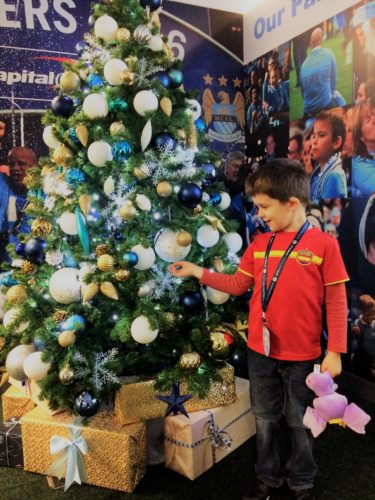 We arrived at the City Store with a few minutes to spare and were greeted by our very knowledgeable and cheery guide Dominic. His job was to show us around the stadium and also to sprinkle some festive sparkle on it.

We started in the Tours Exhibition Area which is above the City Store and is home to historic memorabilia, interactive games and videos, and also features the story of the club right back to 1894. It was here that our tour group was split in two teams, Santas and Elves. We were all handed one of Manchester City’s Christmas themed jumpers to have our pictures taken in and then it was time for festive game No. 1, decorating the tree. In our teams, one by one, we had to decorate our trees and the fastest team would be the winners, this ended in a draw. 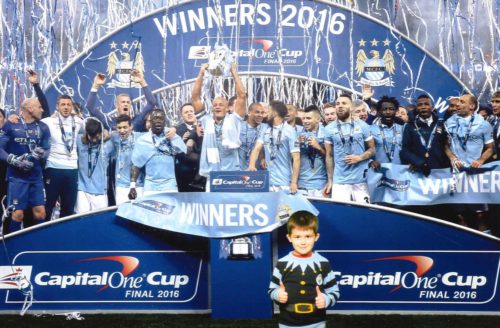 We began the stadium tour and went first to the directors’ seating area and into one of the award winning hospitality suites. We sat outside for a few minutes in the directors’ seats and surveyed the pitch in front of us, then went to check out the media centre and sat in the room where the after match press interviews take place.

The tour continued with a visit to the away dressing room for festive game No.2. Each team took turns to throw mini footballs at little snowmen sat on the benches and again, this ended in a draw of the seemingly equally matched teams. Moving on, we went to the home dressing room to enjoy the comfy seats and to tackle festive game No. 3, flipping the water bottles, which ended up being won 10-4 by the Elves. 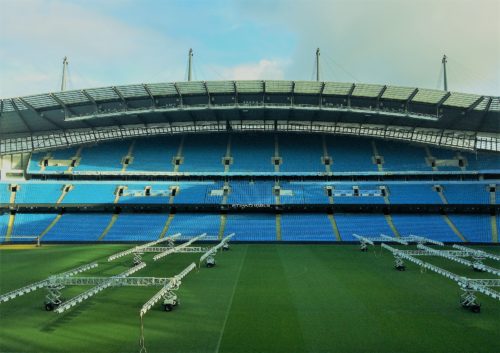 Back to the tour and the tunnel leading to the pitch and then pitch side and a rest in Pep Guardiola’s seat in the dugout for a different view of the pitch than we’d normally have. We then went back inside onto the concourse for the final festive game of chipping a football up into a container. Absolutely no-one on either team managed to do this, so overall Team Elf won the competition because of their superior skills in flipping the water bottles.

Once the festive themed games had finished it was back to the City Store for both teams to collect their prizes (all children under the age of 12 on the tours will receive a Christmas gift from the Club and be entered into a prize draw giving them a chance to be a player escort at the Manchester City v Liverpool match, scheduled to take place on Saturday 18th March  2017).

Manchester City are offering all those that have been on the MCFC Stadium and Club Tour in December a 20% discount off all purchases in the City Store that month. It’s a great place to pick up a present for the Manchester City supporter in your family!

The MCFC Stadium and Club Tour is a really fun way to spend an afternoon, especially in the run up to Christmas. The small boy had a fantastic time and returned home with the biggest smile. He couldn’t wait to tell all his friends at school about it the next day!

Tickets for the MCFC Stadium and Club Tour cost £17 per adult; £11 per child aged 5-16 and £12 for concessions and will run on select days throughout December. For more information, visit the MCFC website. 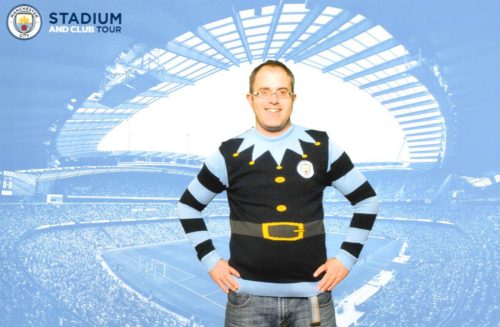 We were invited guests of Manchester City, all images and opinions are our own.