A few weeks ago we had a really fun afternoon playing with a dinosaur sensory Gelli Baff activity box which we put together. We had so much fun with it, the boy made several requests to do something similar; so I went back to my local toy shop and bought some Slime Baff, which is similar to the Gelli Baff but made of slime. We invited some friends around and had some Ocean Slime Baff Activity Box fun! 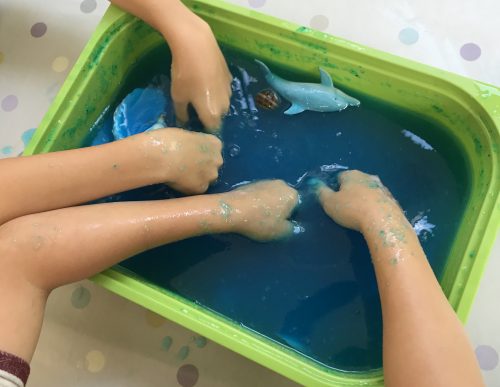 The Slime Baff is available in a range of colours (red, green and blue) but I opted for blue which seemed about the right shade to create a lovely blue ocean with. It’s safe for children and should be fine for sensitive skin. It also has a pleasant fragrance.

A packet of Slime Baff costs £5.99 and there’s enough for one bath in the pack. I used the whole pack in our box of slime. I wanted a fairly thick, gloopy slime for the sensory box, but you could experiment with using less for a looser slime. 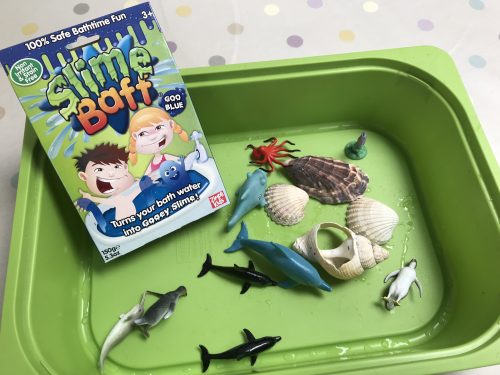 HOW TO CREATE A Ocean slime SENSORY ACTIVITY BOX

You will need:
One plastic storage box. I used an IKEA Trofast Storage box
Slime Baff
Warm water
Selection of plastic fish and ocean life and maybe some shells

How to make your ocean slime sensory activity box:
In your clean plastic box pour in six pints of warm water, you can add more if you need to later. Pour in the Slime Baff powder and stir it in. It should turn to slime fairly quickly. If the texture is too thick for you, add some more warm water and stir until you’re happy with it. 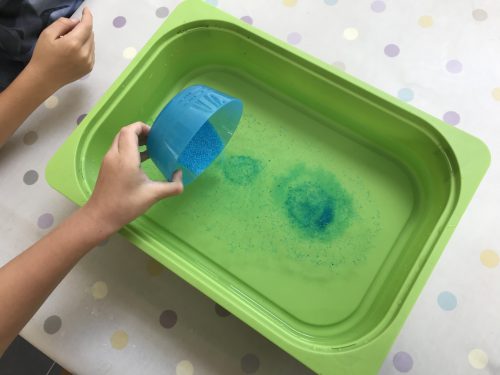 Grab your plastic fish figures and shells and put them in the box, let your imagination run wild.

Once you’ve finished playing with your ocean slime sensory activity box, pour it into the sink and add more hot water until it slides down the plughole.

Although Slime Baff doesn’t stain (or shouldn’t), you might want to wear an apron to protect your clothes.

I put the washing up bowl nearby so any figures he’d played with could go in there and be rinsed off afterwards. Some of the goo did cling to them quite a bit.

We played with this in the kitchen which was fine because if there was mess it could be mopped up. If you’re playing with this in a carpeted room I’d but a wipe clean cloth down under the box to minimise the mess.

Children might like to use tools in the sensory box. The slime really lends itself to scooping and pouring, so if you have some small plastic cups, they might be quite fun to include too.

The slime really clings to your skin, so keep an old towel close by to wipe hands on. You can wash the slime off your hands with soap and water. It is very slippy stuff, so be careful if any gets on the floor too. 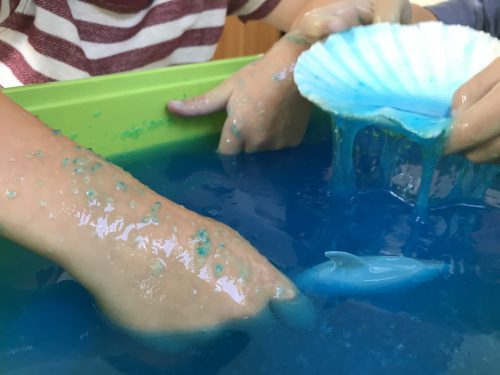 WHAT DID WE LEARN?

Like with the dinosaur sensory activity, this was a good way of expanding his vocabulary and exploring new ways to describe things. We founds words such as; slimy, wobbly, gooey, warm, cold, soft, stretchy and floppy which all described the Slime Baff well.

We closed our eyes and felt around for sea creatures in the goo. When we found them we had to try to feel to guess what we had. We had a selection of shells in the slime too. We tried to figure out what they were by feeling the shape, size and ridges of the shells. This was a great game and one we all really enjoyed.

For a more interesting tactile sensory experience you can make the Slime Baff up with quite warm water and children can explore the different temperatures as the slime cools while they play with it.

He mostly enjoyed just playing with the ocean slime sensory activity box, and who can blame him. It was great fun, perfect messy play for slime loving kids! 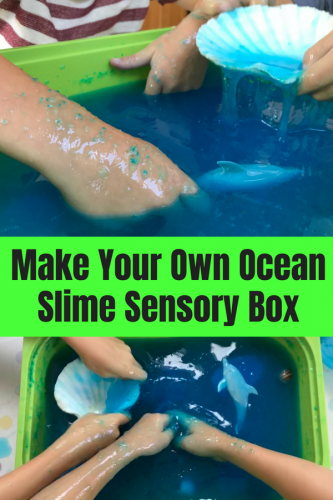