We were sent the Once Upon A Crime and Manor House Murder card games by Foul Play Games for review. All images and opinions are our own.

When we were asked to play and review these card games, I was really excited, because I fancy myself as a bit of an Jessica Fletcher type. I do love a good whodunit. Foul Play Games have released two different game packs to play – Once Upon A Crime and Manor House Murder. So with a table of snacks at the ready, we pitted our wits and tried to solve the murders. 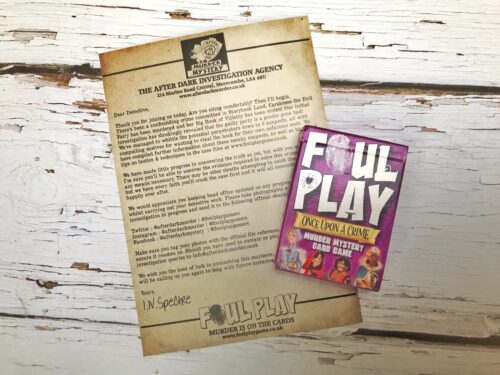 We’d heard that the Once Upon A Crime game was easier to understand, so we started with that. It seems quite rule heavy at first, but once the game play begins, it’s surprisingly straightforward. Firstly choose which type of game you’re going to play – good cop or bad cop and then following the instructions, lay out the crime scene in cards and deal each player their cards and away you go.

Once Upon A Crime is based on fairy tale characters you know and love; but they’ve turned bad, obviously because one of them is a murderer! Each pack contains 4 instruction cards, 8 suspect cards, 15 evidence cards and 28 action cards. 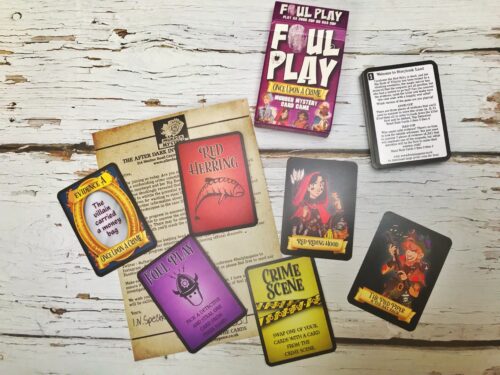 There are cards to trip you up, steal clues from your fellow detectives, block their moves or uncover evidence from the crime scene. Essentially you are taking turns to pick up and discard cards. To win you have to collect three evidence cards and the suspect card of who you think did the crime. Once you have those, you can declare that you have a suspect and then you present your evidence to your fellow detectives.

It’s fun, and once you’ve understood the rules, it’s fairly fast and you can quickly play a few rounds of this murder mystery game. I really enjoyed it and so did my 10 year old; though he was less keen on losing to Jessica Fletcher here. Sorry son. 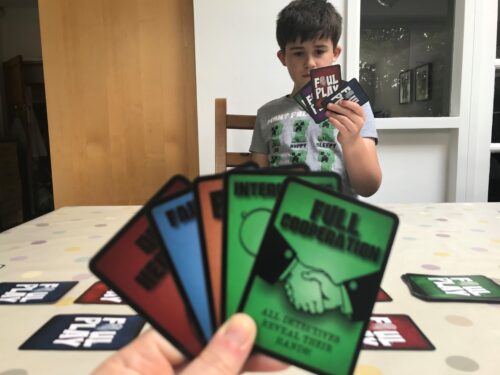 Once Upon A Crime costs £8.95, it’s suitable for ages 8+; it’s suitable for 2-5 players and it’s really great fun. Each pack contains two versions of the game – good cop and bad cop, so it’s twice the murderous drama! As it’s the size of a regular pack of cards, it’s a great thing to pack and take on holiday, or for in-car fun on days out this summer.

We had a bit less success with the original game, Manor House Murder. The instructions were less clear, so it took us a while to figure it out. I suspect if they we re-written in the same style as the Once Upon A Crime game it would be easier to pick up. The game play is similar though, and once we understood that, we had lots of fun tracking down the murderer. 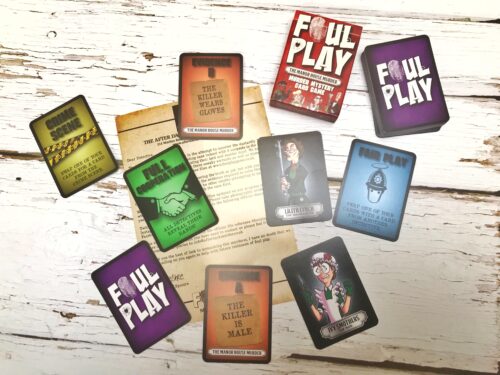 Find out more about these Foul Play games by visiting their website.