A few weeks ago I published a recipe for pork and baked beans. It’s a brilliant recipe, really frugal and tasty but not suitable for vegetarians, obviously. The clue is in the word “pork”. Anyhow, as a vegetarian I was a bit jealous of this homely dish and decided to make a version I could enjoy. I made a few changes and I was so pleased with how it turned out, I’ve decided to share my recipe for vegetarian pork and beans.

The basic recipe is much the same, but having considered my options, I swapped out the diced pork for Quorn cocktail sausages and the smoked bacon for Quorn bacon. If I’m honest, I didn’t love the Quorn bacon in the dish. It didn’t add any flavour, the texture was a bit meh and next time I make it I’ll probably leave it out entirely, or cook it separately and drape it artistically over the top. If you’re missing a bit of the smoky flavour, you could add a bit of barbecue sauce to the mix.

This recipe for Vegetarian Pork and Beans is so simple, it’s the kind of thing you can throw together and leave to bubble away gently in an oven for a few hours. Once it’s cooked, you can eat it straight away or divide it up into portions and freeze it. 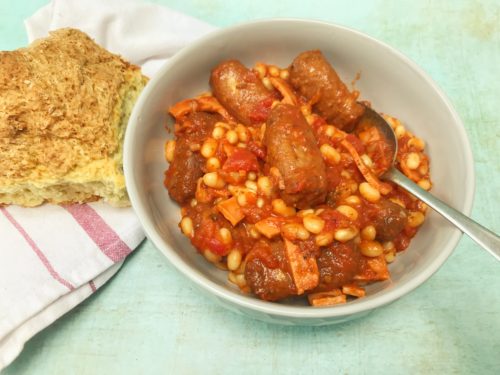 It makes a great lunch on thick toast, or would be great with a pile of buttery mash. I’m looking forward to having it later with a crispy fried egg on top!

This recipe is easy to make vegan, just swap out the Quorn cocktail sausages for your your favourite vegan sausage and enjoy!

How to make your Vegetarian Pork and Beans:

The day before you want to cook your Vegetarian Pork and Beans, soak your dried haricot beans in plenty of water, following the instructions on the back of the packet. Once they’ve soaked for 24 hours, change the water and boil them for half an hour, or until they’re not chalky inside. Drain and set aside.

Put all of the ingredients into a lidded casserole dish, don’t add the salt at this stage, the economy stock cubes I used were pretty salty, so it’s worth waiting until near the end to taste and see if you need to add more salt. Stir the pot gently and put into an oven at 160° for 2-3 hours. Make sure you give it a stir every half hour or so.

Ideally the sauce should be thick and it should look, smell and taste good. It might only take two hours for your beans to get to the right consistency, it might take nearer 3 hours. Just keep an eye on it and use your judgement. The beans should be tender and creamy inside. If the sauce gets too thick, you can always add a splash of water to loosen it.

Taste the sauce. Add more of whatever you think it needs, now is the time to add the salt if you think it needs it. Serve it however you like, it’s great on toast for lunch or piled on top of mashed potato. It’s a hearty dish, perfect for a winter warm up and ideal if you’re feeling frugal. 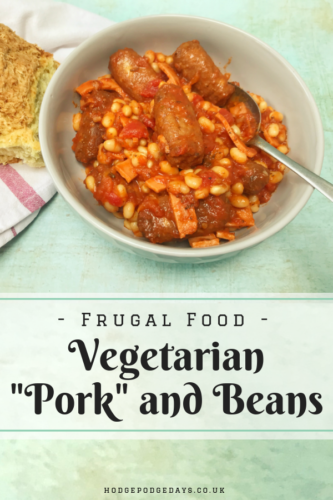 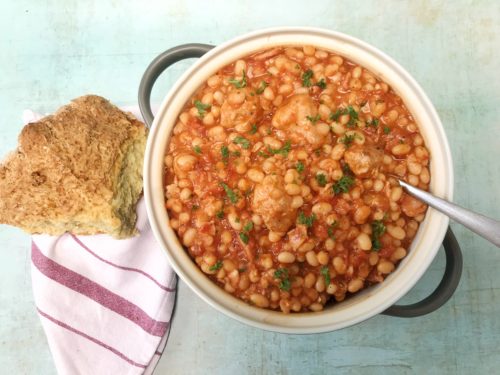 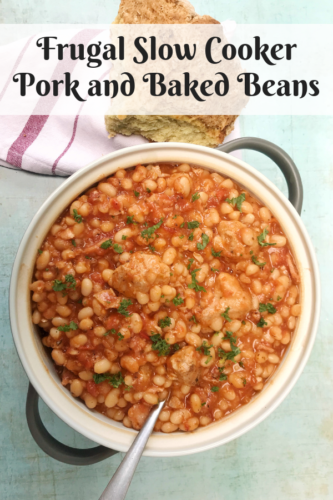