In 2012 I was diagnosed with Post Traumatic Stress Disorder, commonly known as PTSD. I was given pills and then more or less was left to get on with it. There were two episodes in my life which were the triggers for my PTSD, both occurred in hospitals. One was an assault and the other is the result of a traumatic birth and a poorly baby.

For me my PTSD symptoms centre around hyper-vigilance, flashbacks, anxiety and panic attacks. The events which brought on the PTSD happened in 2009/2010 and it wasn’t until mid 2010 that I became symptomatic. Before the first incident I was calm, level headed and strong. When things began to change I felt out of control, anxious and weak.

My son was born in November 2010. His birth was traumatic. In the week afterwards he was subjected to a battery of tests, one of them was a stress test which went on for a couple of hours. Hearing his screams echoing down the hospital corridors haunts my dreams. Just writing it now, I’m reliving it in my head and my chest has tightened and I can’t breathe.

Since my diagnosis in 2012 I have worked hard to find ways of coping with my Post Traumatic Stress Disorder and self care is at the heart of a lot of what I do for myself. Pouring my thoughts and feelings out and into my laptop is one of the things I find really helps me.

Last night I was triggered over a very small silly thing. On twitter I shared a small anecdote about the time I met a very minor celeb (who was in the news) outside a pub. I remarked that his behaviour when I met him was edgy and unsettling. Someone I’d known on twitter a while got snappy with me about it. I obviously touched a nerve with her, although my tweet was innocuous enough.

It got me thinking about why this very minor celeb had unsettled me. Finding the root of the things which bother me or trigger me is something I’ve started to do over the last few years. Doing this is the only way I can confront and deal with the bits of dark inside me which will help me to heal.

After some thought (at 2am, never ever a good time for deep thinking) I realised I was unsettled by the celeb as his demeanour was almost identical to the man who assaulted me. He was edgy and dangerously unpredictable. I doubt the celeb would have laid a finger on me, but remembering the assault triggered a panic attack, which triggered some flashbacks, which meant I was too worried about having nightmares to go to sleep. And now the PTSD, anxiety, flashbacks, hyper-vigilance, insomnia cycle has kicked itself off inside me.

More than 12 hours after a something or nothing throwaway comment on twitter I’m now swimming through the sludge of PTSD. I’m trying to keep a lid on my rising panic, but every time I close my eyes I’m back in that clinic room. I’m not sure what to do for the best. I think a good walk and some air will help. I might distract myself with some baking and new puppy cuddles. I need to somehow turn my brain off from thinking and reliving.

But this is what it’s like. You think you’re doing alright keeping control of your demons. Holding things together when the big stuff goes wrong in your life. You take a step back from the things which you know will trigger you, look after yourself and do all the good self care things you know will keep you on track. Then out of nowhere something small and insignificant throws a lego brick under your bare feet and you have a wobble.

A wobble is all it is, I’m sure of it. But it’s a wobble all the same. A Post Traumatic Stress Disorder wobble which will not beat me. 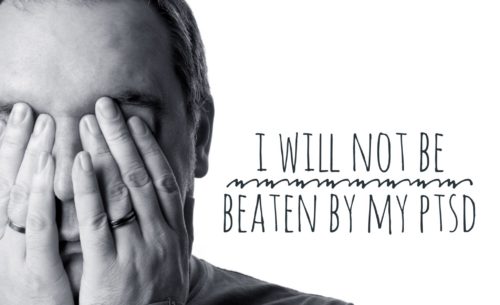