Back in March, for Mother’s Day, I baked a lemon curd sponge, which really was something special. I’ve baked it a few times since, and it’s even appeared in BBC Good Food Magazine, but this time I wanted to mix things up and bake something similar, but with fresh raspberries. I baked a regular sponge cake, but filled it with lemon curd buttercream, raspberry coulis and fresh raspberries. It was a delicious springtime treat, and a birthday cake with a hefty dose of panache. 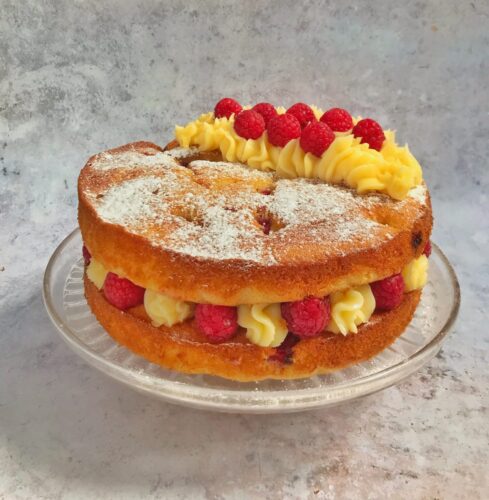 As it was a birthday cake, I wanted to make it look quite a bit smarter than my usual cakes. I decided to pipe most of my buttercream into swirls, with fresh raspberries in between each elegant dollop. You don’t have to do this, but it did make it look pretty fancy. 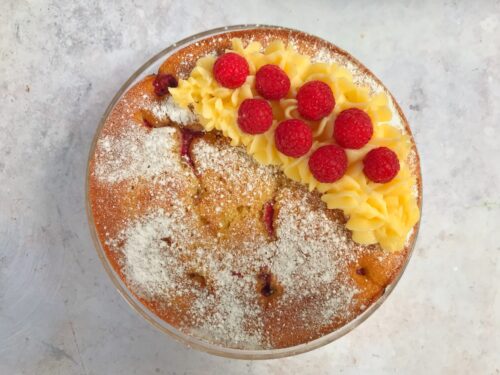 How to make your Raspberry and Lemon Sponge Cake

Heat your fan oven to 190c. Grease two 20cm sandwich tins; I also lined the bottom of each tin with a circle of baking parchment. In a large bowl, beat your butter and sugar together until fluffy (I used a hand mixer). Add the eggs, and milk and vanilla extract and combine, then add the flour and baking powder and mix together until you have a smooth batter. Once the batter is mixed, add in the fresh raspberries and stir.

Divide the mixture equally between the two tins. You can weigh them to make sure they are fairly equal if you’d like. Bake in your pre-heated oven for around 20 mins until golden and they’re cooked through. Remove from the tins and leave to cool on a cooling rack. They need to be fully cool before you put the cake together.

While your cakes are cooling, now is a good time to make your lemon curd buttercream. In a bowl and using a mixer or electric hand whisk, beat your butter until it is soft. Add your icing sugar, and taking care not to create an icing sugar cloud, mix the butter and sugar together until it is smooth. Add the lemon curd and once that’s combined, taste it and see if you want to add a bit more lemon curd, which you absolutely can do. Once you’re happy with your buttercream, it’s time to make the coulis and then assemble your cake.

To make the coulis, sift the icing sugar into a bowl and add the lemon juice. You can either blitz the raspberries in a blender and then push it through a sieve to remove the seeds, or push them through the sieve to make the raspberry sauce. Either way, tip your smooth raspberry puree into the bowl with the icing sugar and lemon juice and mix together. I used a small whisk to do this, which helps smooth out any lumps. 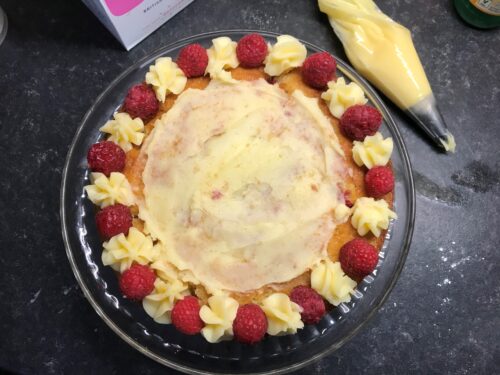 Carefully put the next layer of cake on the top and press down gently so it’s secure. You can then either dust it with icing sugar and leave it, or if you’ve got more buttercream in your piping bag, artistically pipe a few more decorative dollops of the buttercream on the top. Finish with a few more fresh raspberries and you should have a fine looking cake on your hands. 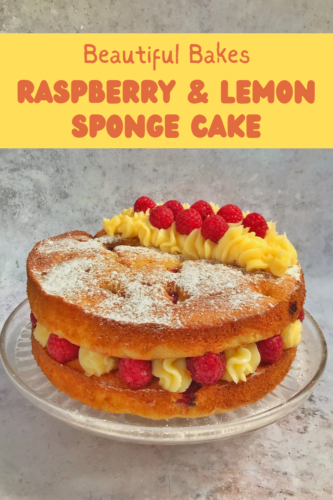