Having shared a bed with my husband for 20 years it’s safe to say we’ve pretty much grown accustomed to each others nocturnal noises. Despite this we do occasionally have a night where one of us snores much, much, MUCH louder than usual, leading to threats of divorce, or beheading or both. I’ve often toyed with the idea getting an anti snoring ring, so I was pleased when we were sent one to try out. 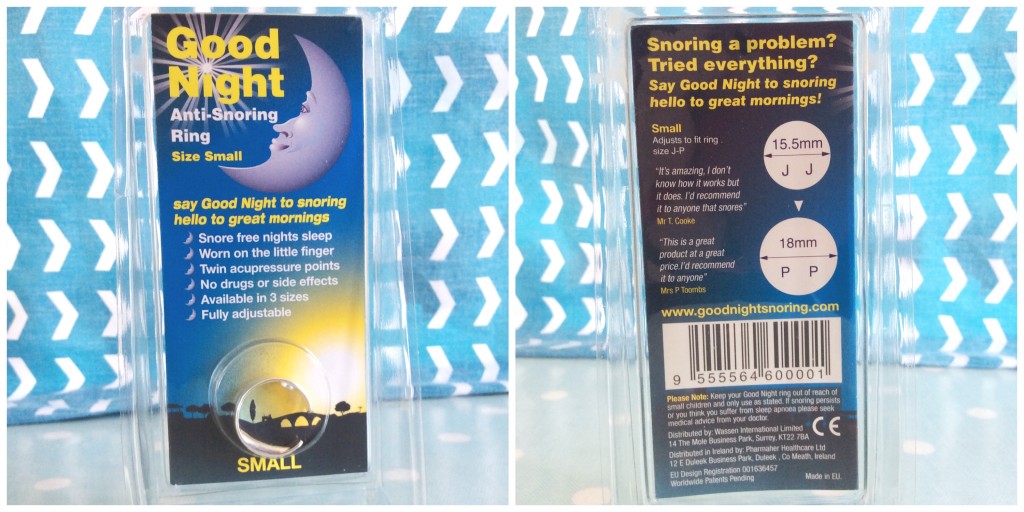 We were sent the Good Night Anti Snoring Ring which is an acupressure ring you wear on your little finger at night. It has an open top (see picture, I’m finding it impossible to describe) so you can adjust it to fit your finger properly. The inside of the ring has some lumps where the ring presses against your acupressure points, It also had the words “Good Night” inside it, which makes me smile a bit. 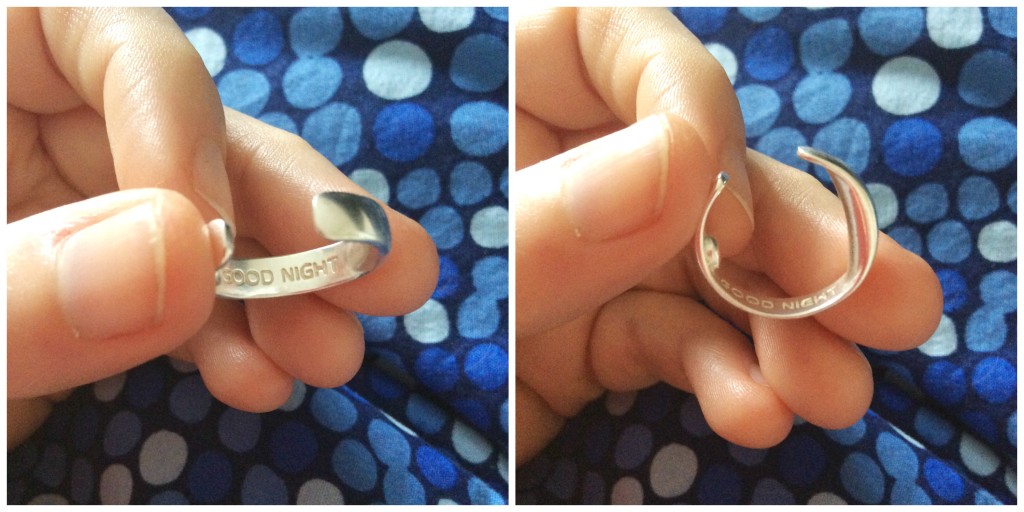 I wasn’t sure how effective it would be, but I was keen to give it a go. We were sent the small size which regrettably was too small for hubs big meaty man hands, I was hoping it might stop him honking like a goose in his sleep. It fit very nicely on my delicate lady hands, so I tried it out for a few nights. All you do is put the ring on half an hour before bed so it can start stimulating the acupressure points and that’s it.

I was impressed. Hubs reported no snoring, though apparently it was hard to tell because he was asleep. But he tends to get up an hour or so before me and I wasn’t snoring then so I’m guessing it works. I also felt like I’d had a slightly deeper sleep, certainly I woke up each morning feeling more refreshed than usual. I’m not a great sleeper so I did notice not feeling like death warmed up each morning.

I would say that when we first received this I had a really horrible cold but thought I’d try it out anyway, it really didn’t work when I had a cold, but I was likely mouth breathing anyway.

The Good Night Anti Snoring Ring doesn’t work for everyone, it works for approximately 85% of people who try it, which isn’t bad odds really and worth trying if you’re sharing the bed with someone who makes the windows rattle. I’ll definitely carry on wearing it at night and look into getting a bigger sized one for hubs.

UPDATE 18/4/15
We are delighted to report that we managed to get a larger sized ring to fit my husband, he has worn it virtually ever night since, with the difference in his nocturnal honking and snoring being pretty significant. In fact he thought he’d been magically cured of snoring so left it off for a night and he was back to his normal honking, snorting, snorting self. I refuse to share a bed with him now if he’s not wearing it. So huzzah! I get my husband back. It works, it really works. It’s amazeballs!

The Good Night Anti Snoring Ring is fairly widely available and you can currently find it in Boots for £29.99 or Amazon

Note: I was sent the Good Night Anti Snoring Ring free of charge for review purposes, all images and opinions are my own.