As a family one of our favourite quick and easy evening meals is fajitas. Usually our fajita evenings consist of an Old El Paso fajita kit, some potato wedges, and as much salad, avocado and guacamole we can lay our hands on. I’m a veggie so we usually load the fajitas up with really well cooked vegetables and some sliced up soya burgers for a bit of protein. It’s a popular, sociable meal which we will all happily eat, it feels like a bit of a treat, but with all those veggies it’s a pretty healthy one.

I was sent a box of things to try from Old El Paso, and with Mexican food being a casual, social affair, we invited some friends around to join us for a fiesta feast! 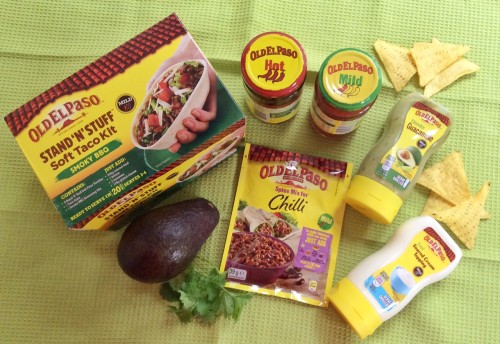 I’d never seen the “Stand ‘N’ Stuff” soft taco kit before, it contains boat shaped soft tortila shells which you fill up with whatever you want. It also contains a packet of salsa style sauce and a sachet of flavour powder. All you do is brown some mince (I used Quorn), add a drop of water and stir through the flavour powder, it is ridiculously quick and really tasty. It had a really lovely smoky BBQ flavour which would I imagine work even better with minced beef. I really, really liked these and would definitely have these again instead of our usual fajitas.

The pack also included a packet of chilli flavour mix. We are big chilli fans and I’ve been eating chilli since my fairly exotic Nan started giving it to us for our tea in the early 1980s. I love chilli and know a good one from a bad one,  this was lovely. I followed the instructions on the packet to the letter, but again used Quorn instead of minced beef. I would use this flavour packet again, maybe next time I’d add more chopped tomatoes for a slightly wetter chilli and cook it for longer to allow the flavours to develop further. 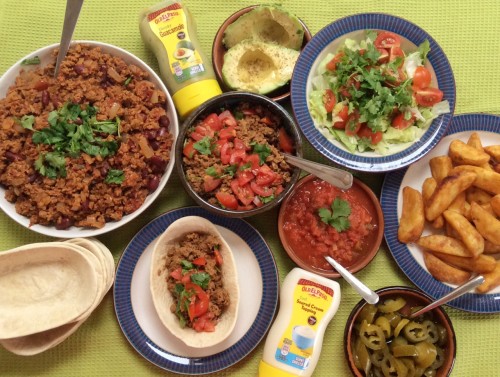 We also tried a jar of salsa – a store cupboard staple for us, and this was a lovely accompaniment to our tacos, likewise the guacamole, it’s nice to have an ambient one for the times when you just can’t make your own. Hubs who likes  a bit of heat enjoyed most of the jar of jalapeños. I wasn’t brave enough to try them and I don’t think the small boy is ready for chillies just yet. 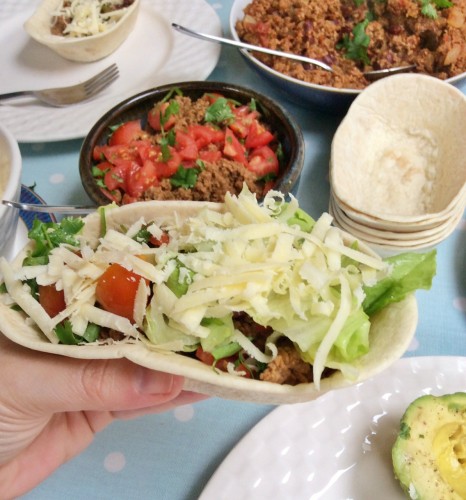 It was a fine feast, we all ate and ate well. The shape of the soft tacos was a bit of a game changer for me, it worked really well for the small boy too, there was less food down his top than usual which is always a good sign. Old El Paso seem to have really expanded their range recently, with more taco and flavour options, I’ll be keeping an eye out for new things to try from them.

As a family we can’t really go wrong with Mexican food, it’s so easy to eat and secretly healthy and a great way to get veg into the boys without any fuss. All that was missing were the margaritas!

Note: We were sent a selection of Old El Paso products to try for review purposes. All images and opinions are our own.