Last weekend we hopped in the car and visited Knowsley Safari Park, we’d been invited to one of their family workshops, but once that was over we decided to buy a ticket and drive round the safari park itself.

We all have favourite animals, but we were all excited to see the scary lions and the cheeky monkeys. As we drove through the gates we didn’t know what to expect, it’d probably been about 20 years since I was there last and even longer for my husband.

It was Easter weekend and it was really very busy, the cars queued up to look at the ostriches and then queued some more to get into the lion enclosure. We locked the car and closed all the windows, I gripped the door handle, lest the small boy decided to make a bid for freedom at the most inappropriate time. He didn’t, thankfully. The lions were beautiful, majestic and very, very sleepy. I was very much in awe of them, such powerful creatures.

We drove on around the park catching glimpses of rhinos, zebra and an array of antelope; but we were most excited to see the cheeky monkeys. The small boy delighted in them leaping from car to car, running and capering around. Some vehicles had lots of monkeys all over them; we soon realised that despite notices, people were feeding them to encourage them onto their cars. Naughty! 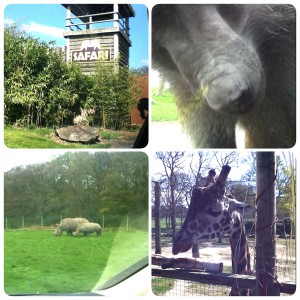 We didn’t have any food, nor would we have fed them, so it did take some time to lure a monkey onto our car, much to the screams of excited delight from all of us inside. We saw lots of baby monkeys and lots of mummy monkeys cuddling their babies. A few cars did get a “monkey MOT” which mainly involves removing or damaging windscreen wipes, aerials, mirrors and anything grabby, snappy and bendable. We managed to escape with our car intact.

We loved Knowsley Safari Park, which has much improved in the last 20 years and the small boy has talked of nothing else but the “cheeky monkeys on the car” ever since. It’s a grand day out!