With summer upon us and children to entertain during the school holidays, it’s good to get out in the garden and play some games. We’ve been playing a new game from Spin Master Toys which is great in the garden, or works equally well inside if the weather is not on your side – Wobbly Worm. 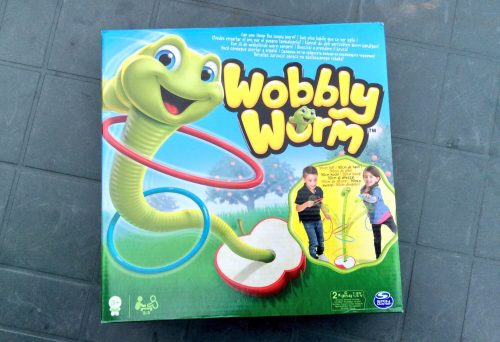 I confess I was initially drawn to this because I loved the name and seeing it in action on YouTube made me smile. I knew my son would love it and I was right. Wobbly Worm is designed for children aged 3+ and is an update on old fashioned hoopla. Wobbly Worm is a plastic worm with a base shaped like half an apple. Switch him on and he will wibble and wobble while you try to toss your hoops over his head.

The game is suitable for 2-3 players, but you could happily play with this by yourself, or in a group of friends or family. 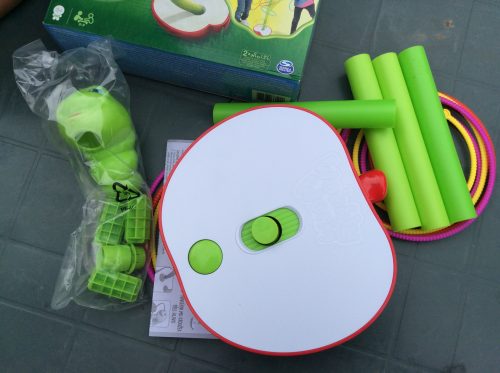 Wobbly Worm comes with 9 plastic hoops in different colours and sizes and a set of instructions. What aren’t included are batteries (you’ll need 2 C batteries) but you can put the worm together and play with your stationary worm while your other half nips tot he shops to buy some batteries.

The hoops come in three sizes, obviously the smaller the hoop the harder it is to get on the worm. I liked that the hoops have little connector for safety, which can be quickly unclicked and opened up if someone does something they shouldn’t be doing with their hoop.

It’s really easy to put your Wobbly Worm together, there are four worm pieces which fit together with connectors. You push one of the connectors into the base and put the smiley worm head on the top. All you need are the batteries which you’ll need a screwdriver to open up the slot to fit them into the apple base. 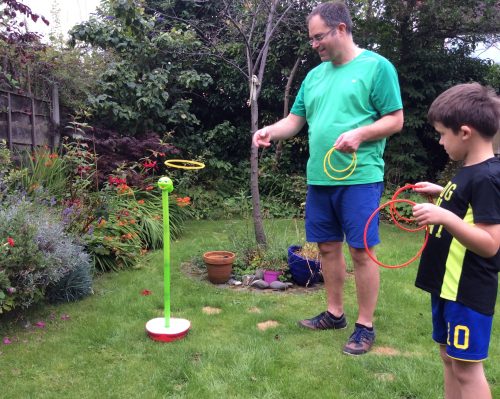 You can make your worm as long or as short as you want, just by adding or removing worm sections. The Wobbly Worm has a maximum height of 3ft, so at full length he’s about right for my quite tall 6 year old. Of course, the taller he is, the more he wobbles. To set your worm off wobbling, just press the start button on the apple base and off he goes!

Wobbly Worm is a great way to build hand-eye coordination and it takes some concentration to get the hoop over your worm, even before you switch it on and the worm and apply both start wobbling all over the place. It really is lots of fun. You can make it easier or more difficult by adding worm sections; drawing a line where you have to throw your hoop from. If you’re a beginner, just don’t switch your worm on until you get the hang of it. 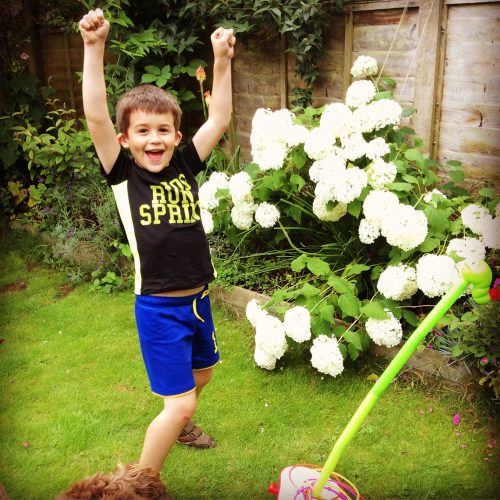 My son absolutely loved it and it will be coming on holiday with us. Luckily it all packs down into a reasonably small box which we can just throw in the car. I like that you can play with it differently to change up or change down the difficulty levels. I also like that it’s working and refining his co-ordination. It is really good fun for all the family, even the adults!

Wobbly Worm costs around £20 on Amazon, but the price may vary depending on where you shop.

We were sent the Wobbly Worm for review purposes. All images and opinions are our own. This blog post contain an affiliate link.