No, I hate quite a lot of magic shows. To explain, my Dad is a magician and I’ve been around magic and magicians my whole life. I’ve watched a thousand rehearsals, I’ve seen most tricks a million times. It takes a lot to impress me, so I never go to magic shows.

I was given the opportunity to go and see the Cirque Du Hilarious at Blackpool’s Central Pier; so I consulted my Dad, who told me that father and son performers Clive Webb and Danny Adams were the best in the business, so I snapped up a trio of tickets and took the boys, one big and one small.

The show is on Central Pier, slap bang in the middle of the Blackpool action. It was one of the hottest days of the year, so we welcomed the cool shade of the theatre. The small boy was in awe of the lights and the scenery and I was genuinely excited to be taking him to his first magic show. The show was 90 minutes of non-stop slapstick, comedy and magic. It was definitely a mad-cap show with barely any let up for the performers. The small boy is nearly 4 and he loved it, I think a lot of the jokes went way over his head but he liked the action, the slapstick and the dancers a lot. He especially liked the band playing at the end and the catchphrase (repeated all the way home to Manchester) “I haven’t got a guitar”.

It was as expected, hilarious. There was a little bit of blue for the Dads, which had my hard to please husband laughing out loud, some of it was edging towards too smutty for a family audience, but most of that seemed to go over the kids heads.

What did I think of the magic? There were several riffs on old favourites, Danny made a number of doves appear ‘as if by magic’, and it was beautifully done. There were plenty of appearing and disappearing girl illusions, the boys (one big and one small, remember) were transfixed and impressed by what they saw. It was all very well done, even for a magic snob like me. The dancing girls were beautiful and my boys were transfixed, the small boy was especially enamoured with the dancing monkeys, who doesn’t love dancing monkeys though? My highlight was “Find the Turnip” which you have to see to fully appreciate. There were a few deliberate and accidental slip-ups but they truly added to the craziness of the show.

To find out more about Cirque Du Hilarious you can visit their website or you can book tickets here. 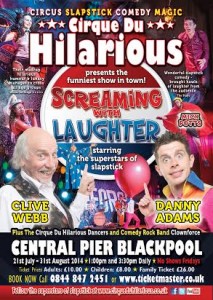 Note: I was sent tickets to the show free of charge, the opinions in this blog post are my own and are as honest as I can be.