For a few days before the show, we’d had the boy watching the Dinosaur Zoo trailer and trying to get him all excited about his trip to The Lowry to see the show.

We’ve been there before and he loved it so we had high, high hopes for this trip. More so given the fact we could now get the Metrolink there (which he loves) and go door to door pretty easily.

Dinosaur Zoo is an interactive dinosaur show for children aged 3+. The boy is just short of his 3rd birthday now but he’s bright, mature and loves dinosaurs so we thought we’d chance it.

It’s an Australian production showcasing some of the many dinosaurs you’d have found in the southern hemisphere 65 million years ago. The dinosaurs are realistic, almost life sized puppets which move authentically and make all the right noises. 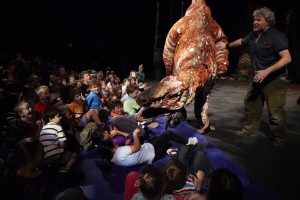 It’s a very educational production, which at the same time is entertaining, exciting, interactive and occasionally scary for the young audience. It was interesting, but I think a lot of the show went over my boys head, the older children around us seemed interested though. Maybe three is just a touch too young.

The zoo-keeper Lindsey Chaplin was engaging and informative, but some of her jokes fell a little short, perhaps it didn’t suit the English audience, or they were just pitched wrong. I’m not sure. There was a lot of talking and information which didn’t always hold the attention of the young audience. But really the dinosaurs were the real stars of the show, that’s what everyone had come to see.

As I said it was scary and some of the smaller children did leave early. I think the dinosaur roaring and trying to eat a 7 year old might have been too much for them. My brave little soldier loved it, the roarier the better as far as he was concerned.

His highlight was meeting the dinosaurs afterwards outside. We thought this was a lovely touch as not many kids got a chance to go on stage and meet them. It was great to see the dinosaurs at close quarters. The puppets are beautifully made with amazing attention to detail and their movements were incredibly life-like.

It’s always a sign that he’s had a really good time when he spends the whole journey home muttering “more dinosaurs, more dinosaurs”. Yes, most of it went over his head, but visually and as an experience it definitely hit the spot for him.

If you’ve got a dinosaur mad child, then it’s well worth going to see this while it tours the UK.

Find out more about Dinosaur Zoo here, or what’s on at The Lowry. Next stop for us is The Snail and the Whale. We’ll let you know how that goes!

I also wrote a separate review of Dinosaur Zoo for Mums & Dads Magazine which you can read here.

Like Loading...
This entry was posted in Theatre & Entertainment and tagged Dinosaur, Dinosaur Zoo. Bookmark the permalink.