This summer there’s a treat in store for PAW Patrol fans – the PAW Patrol are on tour with their PAW Patrol Live show! The UK’s favourite pups have set sail on a Great Pirate Adventure and you can catch them touring arenas up and down the UK this summer. We took our PAW Patrol fan to the Manchester Arena over the weekend to see the show, but what did he think? 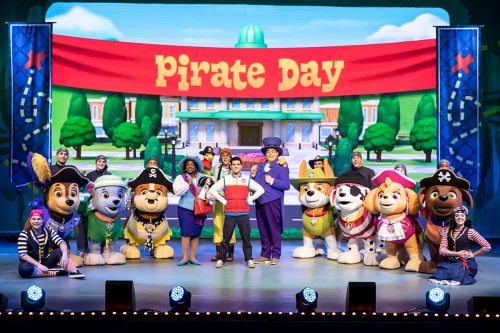 What happens in The Great Pirate Adventure?

In The Great Pirate Adventure, Mayor Goodway is busy getting everything shipshape for a big Pirate Day celebration in Adventure Bay; but when Cap’n Turbot falls into a dark and mysterious cavern, it’s up to the PAW Patrol to save the day!

Marshall, Chase, Skye, Rubble, Rocky and Zuma ride to the rescue; saving Cap’n Turbot and discovering a secret pirate treasure map. An exciting adventure awaits, but will Mayor Humdinger succeed in throwing the pirate pups off the scent?

The pups soon set sail on a pirate adventure to find the treasure for Mayor Goodway. It’s all paws on deck to solve this mystery and find the pirate treasure, including help from the newest PAW Patrol pup – Tracker! No job is too big, no pirate pup is too small!

What did we think?

We had good seats on the front row of one of the tiers, we were to the side of the stage with a rail in front of us. The boy could only really see above the rail if he sat on our knee, which was fine, it meant we could jig along to the music with him.

The Great Pirate Adventure has two halves of around 40 minutes each with a 15 minute interval, which I think is just right for young children.

The characters are really well done, each character has a human visible behind them, doing the voices and acting along. Although the faces of the PAW Patrol are animated, we liked that the people operating them wore hats and costumes and were a part of the show too.

There was a song every few minutes and lots of dancing. There were some great touches, like Ryder’s car was a real car which he drove across the stage. I also really liked Ryder’s Pup Pad which walked onto the stage each time with the characters he was talking to in it.

In Great Pirate Adventure the Mayor characters seemed more interesting to me than in the series. Mayor Goodway was really well acted and I really liked (though I’m not sure I’m supposed to) Mayor Humdinger who by the end had the best costume in the show.

The set was ever-changing, colourful, versatile and impressive. It’s as lively and interesting as they can make it for stage.

The show we went to was the third show of the day and unfortunately there were lots of empty seats, which did make the atmosphere a little flat. We know someone who went to an earlier performance where almost all of the seats were filled and they said the atmosphere was great, with more people singing and dancing along. There was lots of audience participation which didn’t work quite  so well in the half empty arena, which was a shame really.

The boy loved it. It was just the right length for him and it was fast paced so there was little chance of him getting bored. I do regret not dressing him up in a PAW Patrol costume. Almost every child in the arena was dressed as Chase, Marshall, Zuma, Skye, Rocky or Rubble, so we missed a trick there. 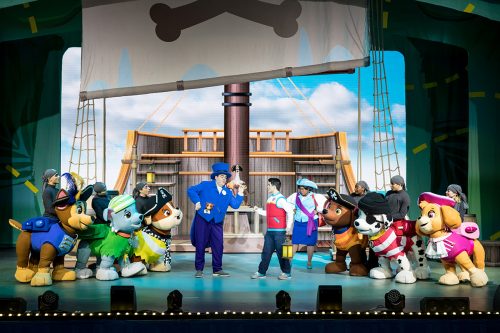 Where can you see The Great Pirate Adventure UK tour?

Tickets for PAW Patrol Live – The Great Pirate Adventure are on sale now and you can find them at https://www.pawpatrollive.co.uk/

Disclosure: We were given tickets to the show in exchange for this review. All opinions expressed are our own.

Like Loading...
This entry was posted in Theatre & Entertainment and tagged Paw Patrol, PAW Patrol Live, The Great Pirate Adventure. Bookmark the permalink.