I’m a big comedy fan and to me the ultimate royal birth was the beautiful arrival of baby David in the Christmas 1999 episode of the Royle Family. If there’s one thing the Royle Family did well it’s pathos and that episode was full of it. I remember sitting with my family watching it and every one of us had a tear in our eye. For me that was the last truly great episode and none that followed, have lived up to those dizzy heights.

The scene where Denise goes into labour and her Dad is there makes me all emotional. Jim Royle is in many ways an utterly abhorrent character. He loves his family and really cares about them, regardless of how many insults he hurls in their direction. 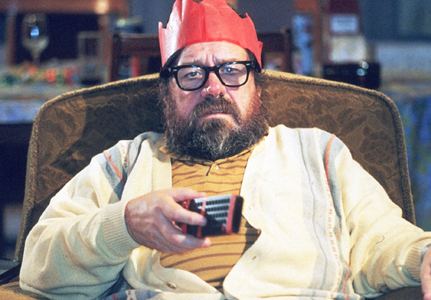 I loved the early episodes of the Royle Family. Coming from Manchester I was already a big fan of Craig Cash and Caroline Aherne. Their writing was absolutely top notch and every single word, pause and breath from the script of the Royle Family was obviously lovingly crafted and slaved over.

I think Craig Cash is incredibly underrated both as a writer and performer and for my money his follow up series “Early Doors” was just as good if not at times better than the Royle Family. If you’ve not seen it then you should, fantastic writing and acting from all involved.

I sometimes wonder what baby David would be up to now. He’d be a hulking great teenager, getting up to mischief, his life would not be full of options and opportunities. Baby David’s life would be the exact polar opposite of the life of opportunity and privilege of baby George Alexander Louis of Cambridge. I know which life I’d rather live.

This post was spawned from a blog prompt inspired by the birth of Prince George in 2013.