Having fun with Num Noms Series 1

A few weeks ago the small boy had a play date with his friend from school, Eloise. They had a lovely time together, played beautifully and it was lovely to hear them giggling conspiratorially away together. Ben often has boys round for play dates, so it was nice to see the difference when he had a girl around. During a lull in the afternoon I gave them a pack of Num Noms to play with to see what they thought of them. 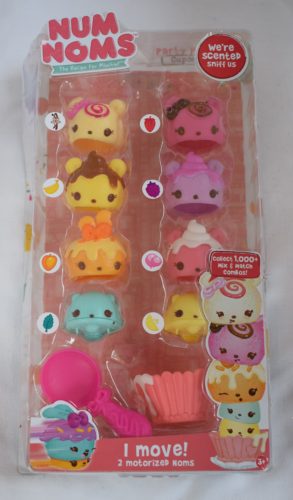 Num Noms are collectable little cups of cuteness where you mix a Num and a Nom to make your own combination of flavours. Num Noms are adorable, scented, squishy characters with tons of personality. We were sent the Num Noms Series 1 party pack to play with. So what did Ben and Eloise think?

The party pack contains 4 nums, 4 noms, 2 motorised Num Noms and a cupcake cup and spoon. Ben and Eloise were really keen to get the pack open and start playing with them. The first thing they did was give everything a really good sniff. They’re all scented and there was much discussion about what they all smelt like and which one was their favourite. 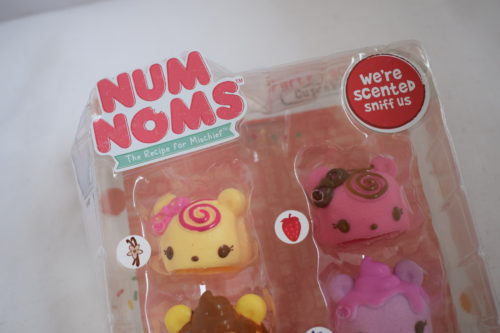 Once they’d thoroughly investigated, they started to stack them and play with them, creating their own unique combinations. They were especially excited by the motorised Num Noms and experimented with stacking them and seeing how high they could go.

They played with them for a good amount of time and Eloise was particularly excited to show her sister how they worked and all the different flavour combinations you could make, so she took them home to play with.

Num Noms are the kind of thing that children would collect, they have a pocket money range which starts from £2.99. Standard packs at £8.99 and these larger party packs for £19.99. I think they’re a fun thing to play with, a little pocket money treat which can spark discussions about how things smell and what they smell like as well as being a little bit of squishy fun. 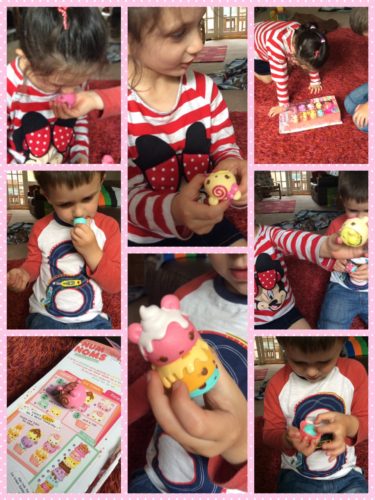 The Num Noms Series 1 party pack sells for around £19.99 and is suitable for children aged 3+. For more information on Num Noms visit their website.

Note: We were sent the Num Noms Series 1 party pack to play with and review. All images and opinions are our own.

Like Loading...
This entry was posted in Toys and tagged Num Noms, Num Noms Series 1. Bookmark the permalink.