Since the small boy was poorly a few weeks ago and he binge watched the entire back catalogue of Pip Ahoy! on Channel 5’s Milkshake, we have been a house obsessed with Pip. For his birthday he was given a lovely Pip Ahoy plush toy (which now has the number one cuddling spot in his bed), and the latest Pip toy a Pip Ahoy! Skipper’s Bucket – a pull along tugboat which also doubles up as a bath toy. 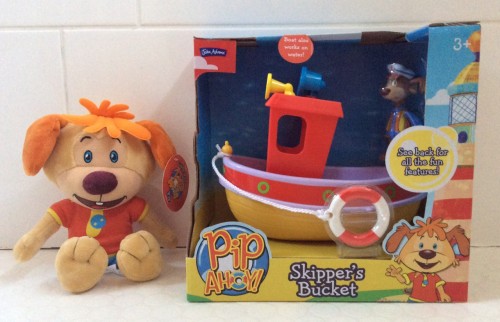 Skipper’s Bucket is suitable for ages 3+ and measures 20cm long and 17cm high. It has rotating wheels underneath and you can pull it along using the rope and lifebelt attached, or like the small boy, you can play with it in the bath, it floats and had a realistic rocking motion once it’s in the water.

It comes with a Skipper figure, but you might want to get a few of the other characters to add a bit of variety. The Skipper figure has little holes in his feet so you can attach him to various parts of the boat, he is also movable and poseable.

The Pip Ahoy! Skipper’s Bucket boat is made from durable plastic and seems to be able to endure the attentions of a 5 year old boy at bathtime. The rope can work loose, so it’s worth getting someone with their Boy Scout knot tying badge to double check it’s firmly attached before it sets sail in the bath, but it’s a great bath toy in its own right.

The Pip Ahoy! Skipper’s Bucket toy is available from a range of retailers and is made by John Adams Toys. It’s a lovely robust toy which he’s played with every day since his birthday, both on dry land and in the stormy sea (the bath). It’s a thumbs up for us!