The colder months are an absolute nightmare for everyone. It generally puts things on a bit of a downer, including your garden. The once blossoming flowers will now be shedding their leaves, being left looking to a broken stick or nothing at all. Yet your garden should be your prettiest asset of your home. Even in the cold winter months, it’s possible to keep it nearly as bright and as flourishing as it was during the summer. Check out these little tips, and see if you can incorporate them into your garden. 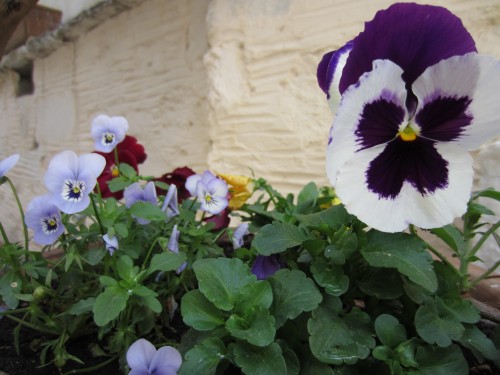 They exist, and they are fabulous. But you’re running out of time to get them into your garden. The soil at the minute will be starting to harden, meaning it’ll be pretty much impossible to get the flowers nicely into the bed. So, you need to quickly go down to your local gardening center and pick out some flowers such as Cyclamen or Japanese quince. These will blossom all winter long and bring some lovely colours into your garden. Then you need to quickly turn up the soil to bring up the fresh moist layer underneath. Plant them, and tend to them over the cold weather as necessary. Nothing makes a garden look prettier than some colourful flowers.

The grass can be a nightmare to cut in the summer, let alone as it goes colder. It rains or is damp most of the time, leaving the grass pretty much impossible to cut nicely. But have you ever considered artificial grass? It’ll take away all the worry of keeping the lawn neat, and will have no issues such as weeds or just general scruffiness that you need to worry about. The cost of artificial grass isn’t even that expensive either. It looks pretty much the same as well, just less hassle!

There’s nothing worse than being cooped up all autumn and winter as a kid due to the cold weather. They should still be able to learn and play in the garden rather than being sat in front of the TV. There are some really good activity sets available from different stores that’ll keep the kids entertained all the time. They aren’t bothered by the cold as we are, so it’s so much better for them to be out enjoying themselves and using their imagination.

The garden during the summer is usually a place of socialisation and relaxation for you and your friends. This shouldn’t change just because the climate does. Get yourself a large outdoor heater, a smaller table, and some sofa styled outdoor furniture to keep things warm and cosy. There’s something so relaxing about sitting in the garden, looking up at the stars, and having a drink and a laugh with friends. Again, it’s better than being cooped up inside when the garden can still be enjoyed.

No one should let the cold ruin their time in the garden, or ruin the way the garden looks. There’s so much more than could be done accessory and decorative wise when it comes to gardening. Have a Google to explore some more ideas!