Last week we reviewed The Incredible World of Bugs, a Paperscapes books from Carlton Books. This week we are taking a look at Paperscapes – The Fearsome World of Dinosaurs. The Paperscapes books are beautiful hardback books, filled with die-cut illustrations and facts and information about dinosaurs.

Meet some of the most incredible creatures to have ever walked the Earth! From leggy leaf-eaters to reptiles that rule the skies, mean killing machines to creatures with musical crests, you’ll discover a new beast with every turn of the page.

Beautifully illustrated by Stuart Martin and Clare Baggaley, each intricately detailed dinosaur illustration has perforations around it, so you can carefully press out the blank surrounds. This makes the dinosaurs really stand out on the page and it turns a seemingly normal book into a work of art. 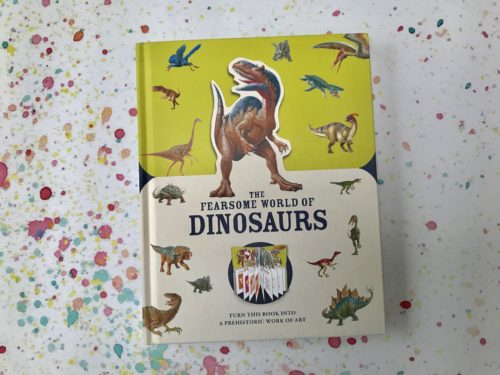 Written by Pat Jacobs, The Fearsome World of Dinosaurs is packed with dino facts, including where they lived, their size, what they ate and what their name means. There’s also a map of where they lived and some did you know style facts.

The Fearsome World of Dinosaurs is aimed at children aged 7+; but I think it would appeal to dino loving children right into their early teens. The facts are pitched at just the right level and the language used is fine for a good reader aged 7 and not too simple so that a teenager can enjoy reading it. It’s packed with facts and my 8 year old positively devoured it. It’s exactly his kind of book, and we all know how much he loves dinosaurs!

If you like the idea of these Paperscapes books, but dinosaurs aren’t your thing, There are three other books in the series –  The Incredible World of Bugs;  The Spectacular Journey into Space and The Amazing World of Animals.

Paperscapes – The Fearsome World of Dinosaurs by Pat Jacobs is published by Carlton Books and costs £12.99. It is available online and from good bookshops. 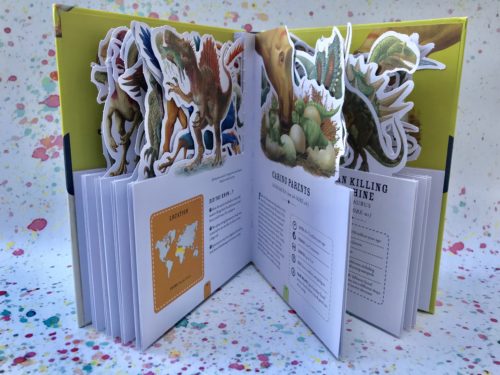 Disclosure: We were sent a copy of  Paperscapes – The Fearsome World of Dinosaurs for review purposes. All images and opinions are our own.

Like Loading...
This entry was posted in Books and tagged Paperscapes, The Fearsome World of Dinosaurs. Bookmark the permalink.