This year’s Tour de France takes place from Saturday July 7th to Sunday July 29th 2018. This is the 105th Tour de France and it is made up of 21 stages, covering a total distance of 3,351 kilometres. The Tour de France is a real spectacle, especially for fans of cycling. One of the sponsors of this year’s event is Bostik, and as a Bostik Craft Blogger I’ve been asked to put together a craft to mark the 2018 Tour de France!

I admit to being a bit out of my depth talking about the Tour de France. I know very little about cycling, other than how to ride a bike. But I do know how to stick some buttons onto some card, so I will play to my strengths and tell you how I made this Tour de France inspired bicycle card. 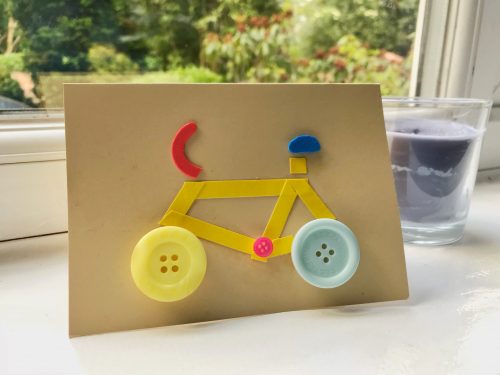 How to make a Tour de France inspired Bicycle Card

You will need:
A blank greetings card and envelope
Two large buttons and one small one
Some coloured card
Some small coloured foam pieces
Bostik Foam Pads
Bostik White Glu
A pair of scissors 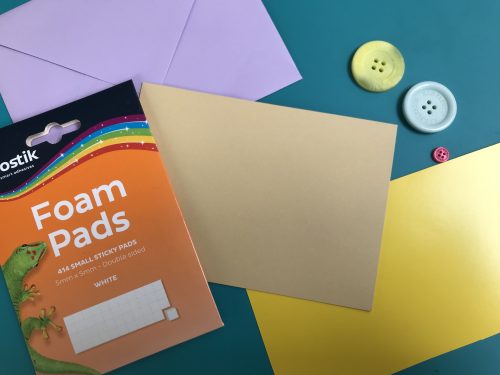 Decide where best to stick your two large buttons on the card. These will be the wheels of your bike. I fixed mine on with four little foam pads. Take the smaller button and stick that on where the chain goes, again using a foam pad.

Carefully using some scissors, cut out some thin lengths of card for the frame of the bike. It will take a few minutes to get the measurements and angles right. Glue the coloured card onto your greetings card with the Bostick White Glu. Press the edges down and leave the card to dry a little while. You could also make the frame out of pipecleaners if you’d like.

While the coloured card is drying, carefully cut out the shape of a pair of handlebars and a cycling seat out of the coloured foam. Glue these pieces into position and leave the card to dry. Your card is now ready to write and send off to anyone who is mad about bikes.

Unless, unless when you’ve finished it and put all your craft stuff away you realise you’ve forgotten the pedals. In which case you can either deem them non-essential, or you can draw them on with a pen. Failing that you could unpack all of your craft stuff and stick on a couple of small rectangular foam pieces where the pedals should be. I’ve left them off because my bike is fine without them. Obviously. 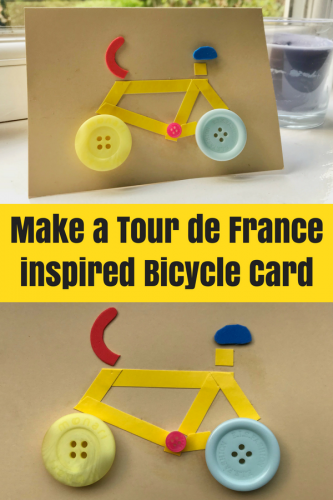 Disclosure: We are Bostik Bloggers and we were sent a box of craft items to use to create this post.