There’s nothing like the Christmas episode of your favourite programme to get you in the Christmas spirit. We were lucky enough to get our paws on a preview copy of the Pip Ahoy! Christmas Ahoy! DVD before its release date on 14th December. I can hand on heart say that you’re in for a treat. The DVD features the 22 minute long Christmas Special which will be shown on Christmas Day, as well as 4 other Pip Ahoy! episodes. The first 200o copies of the DVD sold will also include a bonus 9 track CD with 4 additional Karaoke tracks.

Take a trip down to Salty Cove this Christmas and join the festive fun as Pip, Alba and Skipper decorate the lighthouse; meet Alan’s special Christmas visitors – one of whom doesn’t like bouncing (can you believe it?) and meet Father Christmas!

I don’t want to give too much away, but the Pip Ahoy! Christmas Ahoy! episode is wonderfully heart-warming and full of festive fun. It truly made my heart melt a little, definitely made me want to get my hands on a penguin snowball, and really got me in the mood for Christmas. As for the small boy – he watched it four times in a row, which I think is a pretty good indication of how good it is.

The pre-school series Pip Ahoy! features Sir David Jason as the voice of Pip’s kindly uncle, Skipper, along with singer and reality TV star Stacey Solomon who sings the theme song and is the voice of the pink flamingo, Fuchsia. 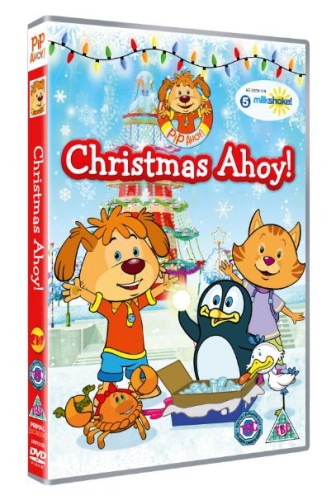 is available for order from Amazon today.