In May we got our very first Degustabox. For those who aren’t in the know, a Degustabox is a monthly food parcel delivery service. Each month you receive a box of new or special edition items from a range of different brands. It costs £12.99 each month and the contents are worth about double that. 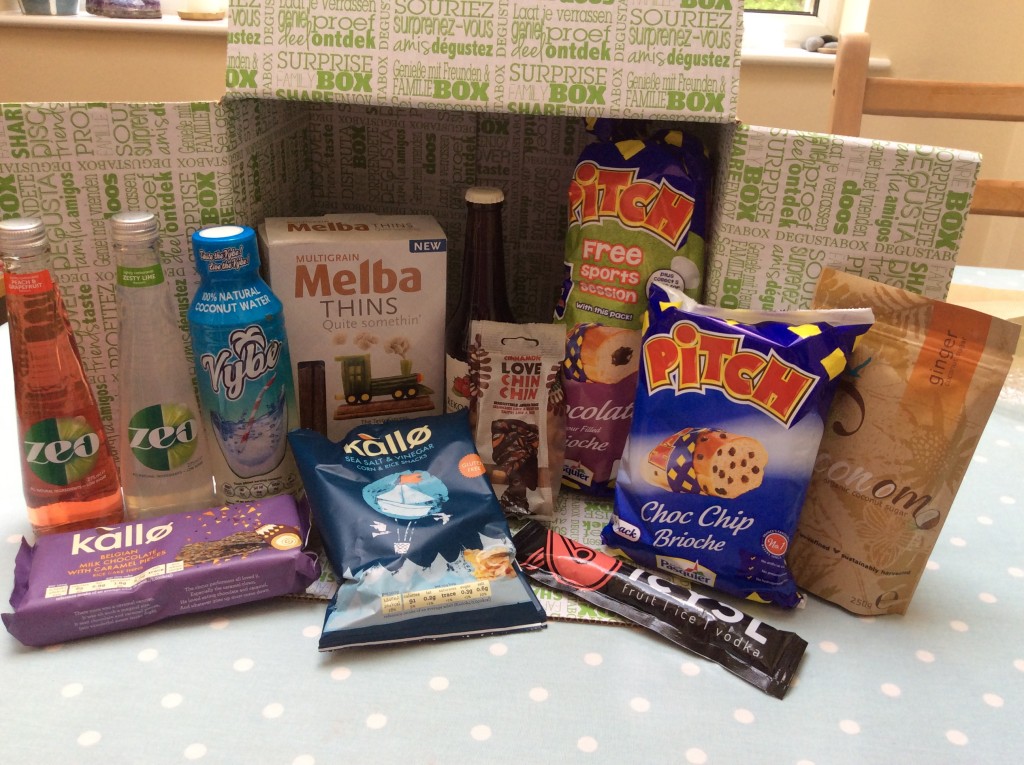 This is only our second box, but already we have fallen into the pattern of immediately ripping open and devouring at least one item from the box. In this box it was the Kallo Belgian Chocolate rice cakes. These were the business. Just 65 calories per rice cake, they were smothered in chocolate and liberally sprinkled with crunchy caramel pieces, even the small boy was shouting for more. They really seem like a guilt-minimal treat, I’ll be looking out for these again!

I wasn’t completely in love with the Kallo salt & vinegar rice cakes, but I think that’s because none of us like salt & vinegar. If we’d had a different flavour they would have been fought over I’m sure. They do a tomato and herb one which sounds delicious and I think would be great with some cream cheese.

Both kinds of Brioche Pasquier were eaten for breakfast the over the following few days. We’ve bought these before, they’re a handy little snack to take out with you if you need to. The small boy also loves individually wrapped things, so he enjoyed them, as he usually does. We’ve bought them before and loved them, so we’ll get them again.

Regrettably the ICYCL Vodka Icepop burst and leaked over the contents of the box, not sure how it happened, nothing was ruined thankfully, but everything was sticky and I didn’t get to try the icepop, which is a shame because it sounded the kind of thing I might enjoy.

I love baking and I was pleased to be sent a packet of Coconom Organic Coconut Sugar which I’m hoping I’ll be able to have time to bake with soon. I’m not sure what I’m going to make yet, but you’re supposed to be able to use it as a direct replacement for ordinary sugar, but it’s supposed to be better for you. Anyway watch this space, I feel an experimental pineapple upside down cake coming on!

I was interested to try the Love Chin Chin snacks which were cinnamon flavoured biscuits which apparently taste like cake. I wasn’t convinced by these in their original form, but I crushed them and sprinkled them on some ice cream and they were very enjoyable. I think they’d be good added to the biscuit base of a cheesecake too.

Hubs is a big fan of coconut water, I can take it or leave it, so he drank the Vybe Coconut Water and liked it. I do know that coconut water is great to drink in hot weather, keeping you hydrated which is really important. I drank the fruity Zeo drinks over ice, they were cool and refreshing, the zingy zesty lime was my favourite and it’d be nice with a splash of gin.

If you’d like to give Degustabox a try I have a discount code giving you £3 off your next box, just enter 8MDEO at the checkout, this code is valid until 31st October 2015. You can find out more about Degustabox on their website.

Note: I was sent a Degustabox free of charge for review purposes, all images and opinions are my own.

One response to “Degustabox June 2015 plus Discount Code”