One of the worst things about coming home from holiday is returning to the old routine and having nothing in particular to look forward to. Thankfully as we sped (at no more than 70mph) down the motorway towards home, we knew we’d soon have a meal at Jamie’s Italian in Manchester to look forward to.

We arrived at Jamie’s and we were quickly shown to our table. Jamie’s Italian is in the old Midland Bank building on King Street. It’s an impressive and beautiful building, built in the 1930’s, they’ve retained as many original features as is practical, and it’s a real treat for lovers of architecture.

We ordered some drinks while we perused the menu. I went for an Aperol Spritz and my husband opted for a Bellini Spritz, and both were refreshing after a bus journey on a warm summer evening. To drink with our meal we ordered a bottle of Jamie’s Italian Rosso Sicilian Red, it is delivered to the restaurant in Tetra Pak cartons and decanted when required. It’s a very acceptable, medium red which went well with our food and was very quaffable.

We argued over what to choose from the fairly extensive menu (with surprisingly few veggie options), but to start we plumped for the Italian Nachos to share and I had the grilled asparagus bruschetta, while himself had the crispy king prawns.

The Italian Nachos were interesting, made with pasta instead of tortillas they had a similar texture but somehow missed the spot. They came with the usual accompaniments, they were piled high and when we dived in half of them fell on the floor, we really wanted to love them, but we merely liked them. 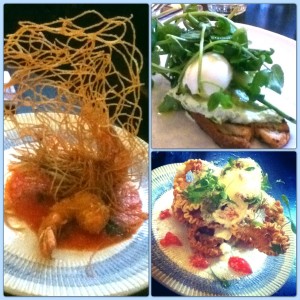 My bruschetta was delicious, the asparagus was beautifully grilled, bursting with flavour and served on top of creamy mozzarella, for me it needed a good twist of pepper, but it was otherwise perfect. Himself was visually wowed by the crispy king prawns; the prawns were plump and juicy and served with a piquant tomato, basil and garlic sauce. The prawns were wrapped in crispy angel-hair pasta and this is where the dish fell down, it was visually impressive, but it made it difficult and fiddly to eat, especially for a lad who doesn’t like to fiddle, he just likes to eat and enjoy his food.

Moving on to the mains; being veggie I opted for the honeycomb cannelloni trio which was aubergine and sun-dried tomato, pumpkin, ricotta and spinach cannelloni with the usual tomato and béchamel sauces. It was an enjoyable dish. The pasta was excellent, just the right thickness and cooked perfectly. I loved the pumpkin and the ricotta and spinach cannelloni, both were well made and very tasty. The aubergine and sun-dried tomato I liked a bit less, it was the blandest flavour of the three. I would have it again, but it did feel a bit too much of a wintery dish for a summer evening. 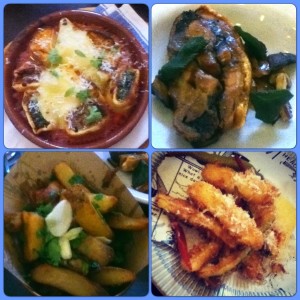 Husband went for the signature porcetta which was British pork belly with fennel crackling and chestnut mushrooms. He also ordered sides of “funky chips” and courgette fritti. He loved the porcetta, which you could’ve cut with a spoon, the crispy crackling brought a cheeky smile to his face and he clearly enjoyed every mouthful.

He kindly (he had no choice) shared his sides with me, we proclaimed the courgette fritti a wild success, though the deep fried pickles the courgettes were served with were actually red hot chillies, which rendered them pretty inedible, but I’d happily eat a number of plates of the courgette. The “funky chips” were a bit of a let down, the chips themselves were crispy, and served with garlic and parsley, I thought these would be off the hook, but they needed a really good dose of seasoning and we ended up leaving half of them.

On to dessert, which we barely had room for, so we shared a generous portion of tiramisu. The Jamie’s Italian version is slightly non-standard, given it’s been sexed up with some orange flavours. I love tiramisu, it is my all time favourite pud. I loved this version, light and creamy, it didn’t have the massive coffee hit of other tiramisu, but I enjoyed the citrusy summery flavours of the orange. It was a hit! 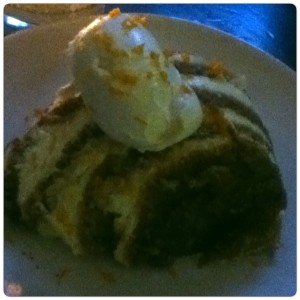 As a vegetarian I did feel the menu was a bit lacking, with only two mains to choose from I think in this day and age that’s really quite poor, especially in an Italian restaurant.

All in all it was a bit of a mixed evening. The service was spot on, informal and informative. The food was good, sometimes great; occasionally a bit disappointing, especially given the pedigree of the restaurant. I liked the relaxed vibe and it’s the kind of place I’d happily come back to with a group of friends on a night out. Good, but not quite great.

Disclaimer: We were invited guests of Jamie’s Italian Manchester. We paid for our drinks and service, but the food was complimentary. This, as you can see, has not swayed my opinions.