River Cottage HQ on the Devon-Dorset border is a fantastic place to visit and dine. I went there recently with some friends (you can read about that here), but it is a bit of an occasion venue and not so much for every day. But we couldn’t pass up the chance to pop to the River Cottage Canteen in Axminster for a spot of lunch while we were down Devonshire way and experience a more casual River Cottage dining experience. 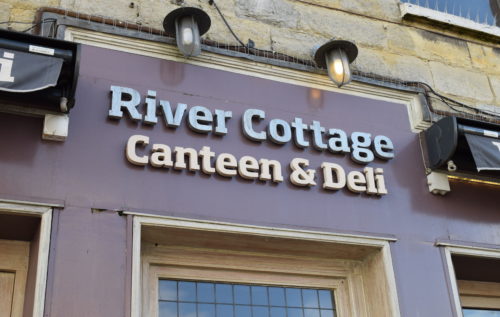 The River Cottage Canteen in Axminster is a large cafe and deli. When we arrived on a drizzly Wednesday lunchtime it was pretty quiet, but it did get much busier whilst we were there. The canteen itself is closely aligned to the principles of River Cottage and everything on the menu is farmed, foraged, caught or grown locally.

We sat by the window in a cosy corner, we ordered drinks whilst we checked out the menu. The menu is written from scratch each day. The chefs come up with new dishes depending on what is available and what is good at that time of the year. The menu is split into small plates (around the £6 mark) and large plates (priced around £15). We opted for two small plates each and a portion of chips to share between us. 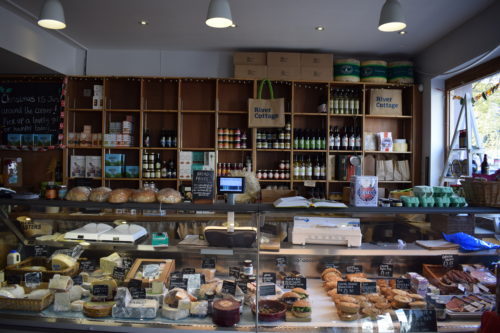 Whilst our lunch was being prepared we had a good look around the canteen and deli. There is good sized deli counter with a decent selection of local cheese and homemade pies and pasties. While we were there lots of locals came in for a sandwich or pie to take away for their lunch.

There was also a good selection of jam, chutney and other jarred goods, as well as biscuits and other goodies. By the open kitchen there was a display of River Cottage gift boxes, hampers and other products which would make great Christmas presents, they were well priced too and I thought they were good value. 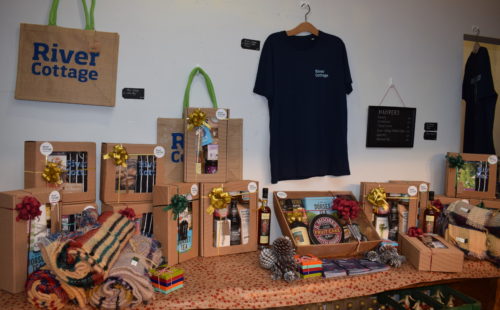 We took the opportunity to chat to the River Cottage Canteen chefs who were very lovely and seemed remarkably unfazed by having three giddy food bloggers interrupting their day. 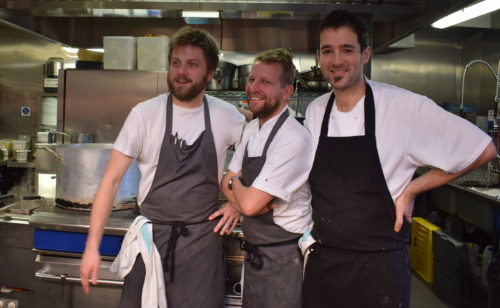 I opted for butternut squash soup with canteen bread (£5.50). I almost always order soup these days if I know it’s going to be fresh and not from a tin. This was a big hearty bowl of thick soup, perfectly seasoned and served with a big slice of good bread. I couldn’t fault it. I know it’s “just” soup and lots of people would think it a boring thing to choose, but for lunch on a cold November day, it was exactly the right choice to make. 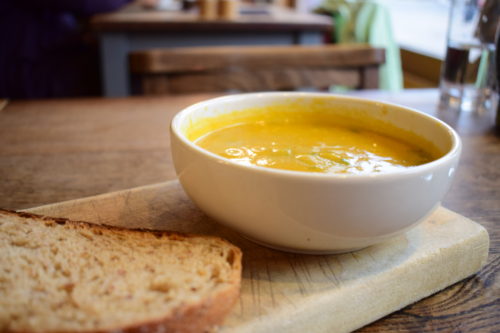 My second small plate was roast celeriac, cauliflower and pickled ewes cheese with salsa verde (£6). The night before I’d had an incredible celeriac dish at River Cottage HQ, so I ordered this with a head full of high expectations. It may look like a casually thrown together plate of vegetables, but the celeriac was beautifully tender, roasted so the sweet celeriac was shown off to the fullest. The pickled ewes cheese was a new one for me, I was expecting a more vinegary, pickled onion taste, but what I got was a cheese with a hit of astringency which balanced the sweet celeriac. A seemingly simple dish which was so well put together it sang on the plate. 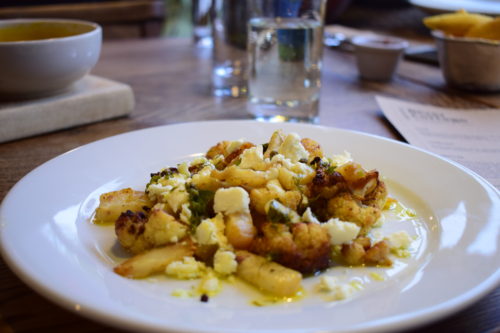 The chips? I’d like to say I managed to get some nice photos of the chips, but they were thoroughly snaffled before I got my camera out. My only regret was not ordering two portions. The chips were crispy on the outside and fluffy potatoey potato on the inside. Often chips just taste of the fat they were fried in, or of nothing much really. The River Cottage Canteen chips were how chips should be. 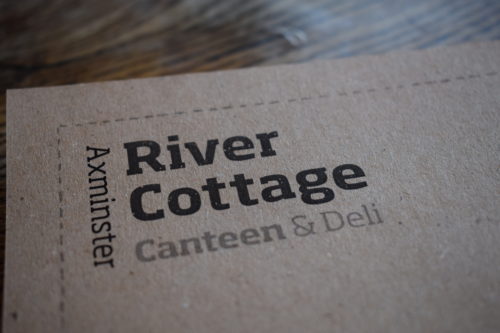 My bill came to a little under £20 for a two course lunch, drinks and a portion of chips. Because I’d had lunch at the River Cottage Canteen I got 10% off at the deli counter, so I did buy quite a lot of lovely things to bring home.

I loved the River Cottage Canteen. I know that it’s the kind of place we will pop into for lunch next time we’re in Devon. It’s casual dining with River Cottage flair, doing its bit to show off fantastic local produce. If you’re down that way, it is well worth a visit. I am so glad we stopped off to try it out for ourselves.

4 thoughts on “Lunch at the River Cottage Canteen, Axminster”