I’m not a bandwagon jumper, a waver of placards or a maker of petitions. I believe in equality and justice and just plain respect for other people. I am just one person and I know I can’t change the world, but likewise, I know the only thing necessary for evil to triumph is for good men (and women) to do nothing.

On Sunday morning I saw a tweet about Joy the store, so being a nosy type I had a look. Basically they were selling a greetings card which said “don’t get mad…take lithium”. There followed the usual Twitter storm which I followed on and off all day. 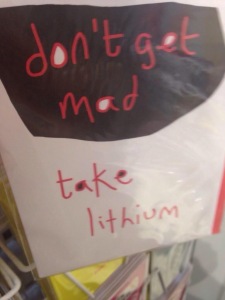 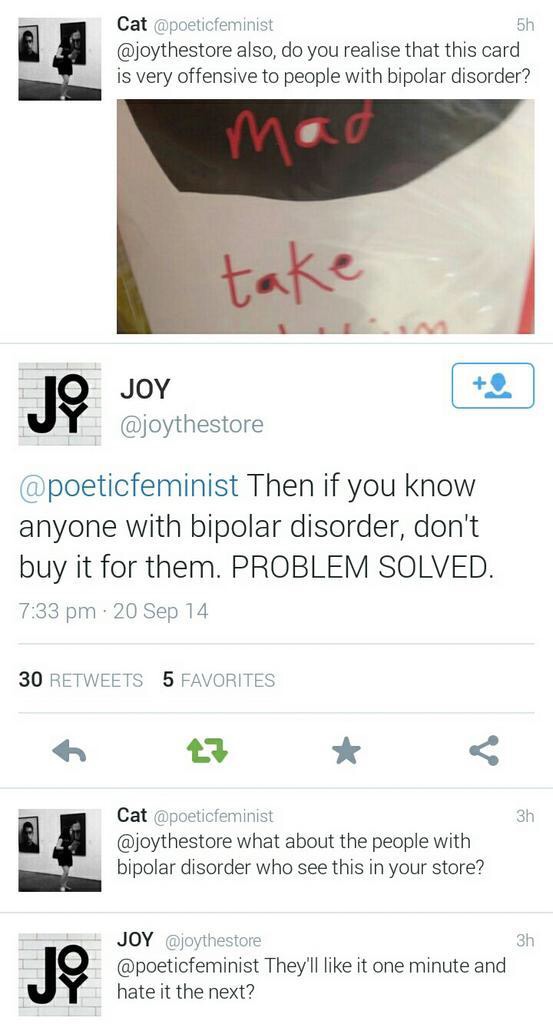 The card did make me tut and shake my head, I thought we were getting beyond this kind of thing, I thought maybe companies had learned a bit of a lesson after the ASDA mental patient Halloween costume from last year, but it appears not. It’s sad, misguided and ultimately disappointing that this card was produced in the first place, but what I find most disappointing is the response from Joy the store.

As you can see from the tweets above their response is pretty flippant and jokey, and their apology (below) is really very poor.

Mental health is serious, it touches most of us directly or indirectly. Bipolar, schizophrenia, dementia, depression, anxiety, PTSD, whatever the diagnosis, whatever the condition, it’s not a laughing matter. People wouldn’t joke about cancer, there are no big laughs about ebola. Why so flippant about bipolar Joy the store?

Before you think it, I’m not po-faced or humourless, honestly at times I see great humour and irony in my illness; but that’s a humour for me to find and enjoy, it’s different to being stigmatised and mocked. I thought we’d moved on from pointing and laughing at “mental people”. Don’t point and laugh, because honestly in the blink of an eye it could be you, or you child, or your parent or friend.

2 thoughts on “Joy the store – bipolar is no laughing matter”