We started potty training just after Christmas and, joy of joys, combined that parenting treat with a dose of chicken pox. Buy one hell, get one free if you will.

I went to playgroup this morning and pretty much everyone sauntered up to me and said with a moderately pained and sympathetic face “potty training….how’s it going?”. At which point I experienced a number of flashbacks ending in the horror that was the poo that was kindly deposited beside my bed this morning. 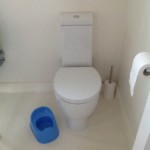 If I’m honest it’s pretty hit and miss. Sometimes he gets to the potty or toilet in time, whips his trolleys down and hits the spot. We all burst into rounds of applause and he gets a standing ovation. Sometimes he almost makes it and still gets a well done, sometimes he just looks me straight in the eye and wets himself. At that point I assume the foetal position and start rocking.

My house stinks of wee. His shoes, both pairs are washed each night, because they don’t smell of feet anymore, they smell like the stairwell of a multi-storey car park. I dream of his shoes just smelling like feet, I really do. We go through more pairs of pants than a Tom Jones concert goer. And I can’t wait for him to get it, for it to click.

He came home from nursery yesterday in what was basically a biohazard suit for toddlers. He’d gone through four complete changes of clothes. We were scared to unzip it for fear of what might come gushing out. He genuinely has more costume changes than Elton John.

But he’s over the chicken pox which is no bad thing. Just need to stop him weeing everywhere now. I’ll do another update soon. I hope it’s more positive than “he’s still peeing in the corner and we all smell like tramps”.