I love cooking and baking, but I have genuinely never laughed so much, nor had so much fun making anything as I have done today making and playing around with these Mega Marshmallows.

I was sent a couple of bags of Mega Marshmallows to try and I was dying to start experimenting with them. There’s something a bit silly and frivolous about marshmallows and you can’t help but smile when you eat them. 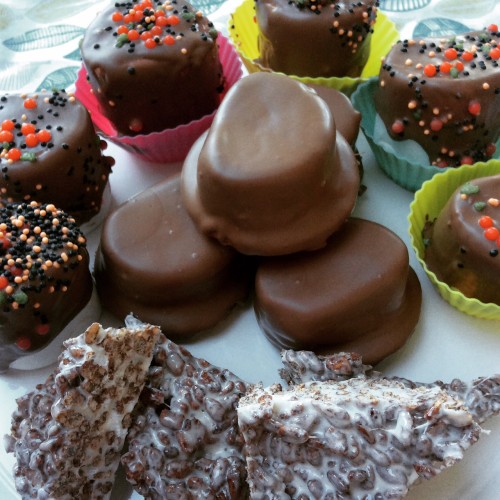 I’ve spent the morning in my kitchen experimenting with these huge marshmallows. They are 5cm tall, and are 84 calories each and contain 0% fat. I made three different things with just a few ingredients, I had SO MUCH FUN and I’m certain my son would (and will) enjoy recreating these recipes with me again. 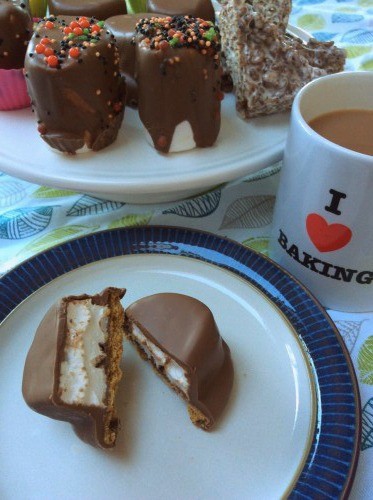 I love a Tunnocks Teacake and nothing on earth could ever come close to that level of chocolately perfection, but it’s still a lot of fun to try. To make six teacakes you will need…

In a warm oven put your digestive biscuits on a tray, chocolate side up, watch carefully and remove once the chocolate has melted. Cut your Mega Marshmallow into two pieces and squash the cut side on top of the melted chocolate. Leave them somewhere cool to set and stick together.

Melt your chocolate and then carefully cover each marshmallow and biscuit with the chocolate, put on a rack and leave them to cool. 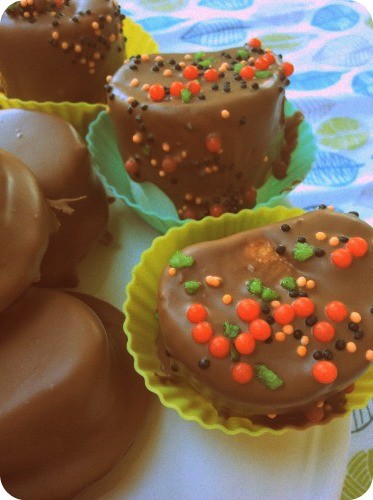 I found I had some melted chocolate left over from making the teacakes, so never one to waste anything I dipped some marshmallows in the chocolate and put some sprinkles on top. They’re really cute and they look great. If I had some cake pop sticks they’d make pretty pops too. 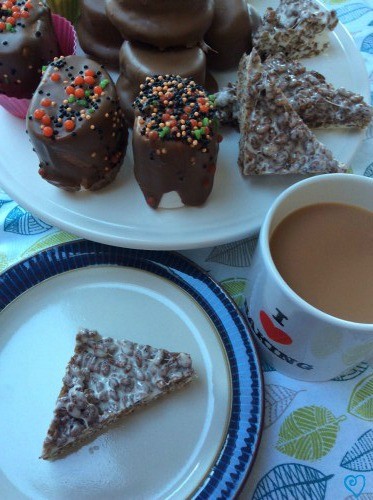 I am not going to pretend that this is my recipe, I saw Nigella make these once and always wanted to try it. She used plain rice krispies, I used the chocolate covered ones. I think if you were keen to up your calorific intake you could add some chopped up chocolate digestive pieces too. This is a real sticky treat which was really fun to make. 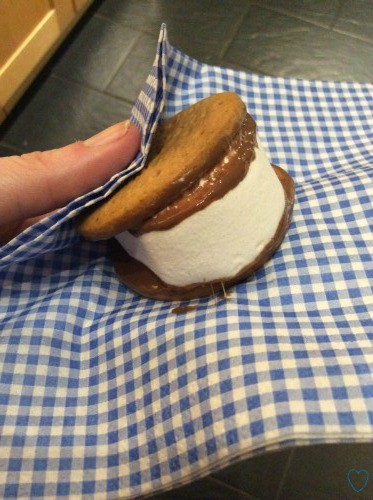 I’ve never had a S’more but I know people rave about them. I have an understanding of the concept so I decided to put theory into practice, but with chocolate digestive biscuits.

Take two chocolate digestive biscuits and sandwich half of a Mega Marshmallow in between them and put them into a warm oven for a few minutes. Keep an eye on them and remove them from the oven once the chocolate has melted. The marshmallow will by this point be warmed through and gooey. Eat quickly and carefully, the marshmallow oozes out unctuously from between the biscuits.

Mega Marshmallows are probably the most fun ingredient I’ve ever used in my baking and I’ve enjoyed being a bit experimental and a bit silly with them. They cost £3 for a 700g pack (I made all of these things with one bag and still had a few left over to  taste test).  They are currently available from Tesco, Sainsbury’s Ocado, Bargain Buys, B&M, Family Bargains, Poundworld and Farm Foods.

Go out and have some fun with them, you won’t regret it! Note: We were sent some Mega Marshmallows to try, all images and opinions are our own.