We were invited guests of Wagamama, and we were given a contribution towards our meal in exchange for our visit. All images and opinions are our own.

My son loves Wagamama and it’s somewhere I’ve been taking him since he was old enough to clutch a set of chopsticks in his little hand. He loves the food and would choose to go for a yakisoba at Wagamama over pretty much anything else in the world. Because of this, we are frequent flyers at our local Wagamama in Didsbury. When I was invited to visit the new Wagamama restaurant at Ashton Moss, I was excited to go, not least because it stands almost in the shadow of IKEA, and a trip there meant I could also legitimately fill my boots with tealights on my way home. 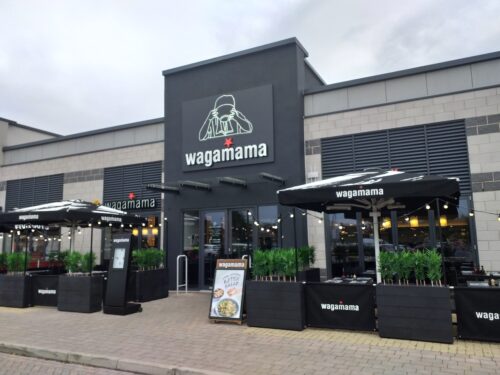 We arrived at early tea-time on a Friday. Ashton Moss is a leisure park dominated by a cinema, but with a good amount of mostly chain restaurants around it. The Wagamama is the latest addition and was already busy and bustling. There’s plenty of free parking outside, though if you’re car free, then there’s a tram stop a few minutes walk away. 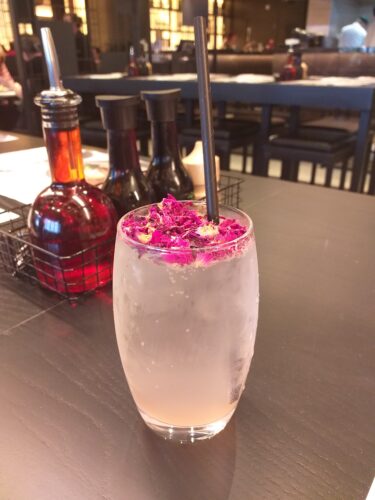 We were shown to our table and given some menus to look over. Being a regular, I already had a pretty solid idea of what I’d like, but as I was visiting, I decided to try something new. But first, drinks! It was a warm day, and as I’d toiled over a hot laptop for the previous 8 hours, I opted for a cherry blossom lemonade – a cherry blossom and cloudy lemon syrup, with sparkling water and a sprinkle of dried rose petals. The prettiest drink on the menu, refreshing too, with a satisfying sherbety finish. 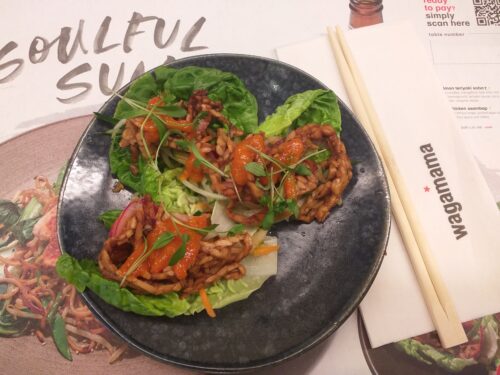 To start, my companion and I opted to share the Bang Bang Cauliflower and the tempeh ssambap, which was a delicious heap of vegan tempeh with pickled Asian slaw. spicy kimchee sauce, nestled in a baby gem lettuce leaf. I didn’t really know what to expect, but I was blown away by the fresh and zingy flavours. It’s definitely something I’ll be ordering again. I’m not sure I’m that much of a fan of putting the calorie counts on menus, but this was 266 calories well eaten. The Bang Bang Cauliflower was well cooked; soft but still with some bite, and coated in a nicely spicy sauce. 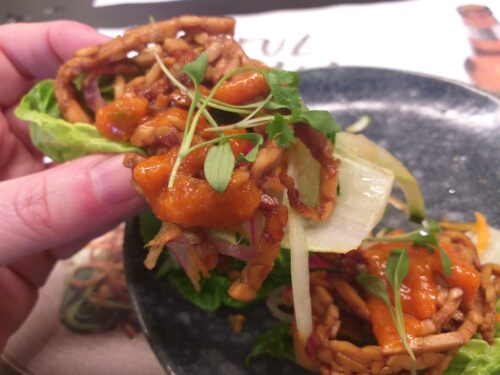 The mains came quickly and I ordered the teriyaki vegan ‘chicken’ ramen. This has been my favourite thing at Wagamama this year. I’m a veggie and I can’t eat mushrooms, which can occasionally make things tricky. The teriyaki vegan ‘chicken’ ramen is a belting dish. It’s a steaming bowl of seasoned soya protein in a spicy teriyaki sauce, thick udon noodles, sweetcorn, bok choi and chilli sambal paste. The sambal is very hot, so I always ask them to go a bit easy with this. The broth is divine and really makes the dish sing, it’s exactly how good ramen should be, it’s comforting and delicious and very much the kind of thing you crave when you’re in need of comfort. It’s so good, it’s turned the head of many a meat-loving dining companion of mine. 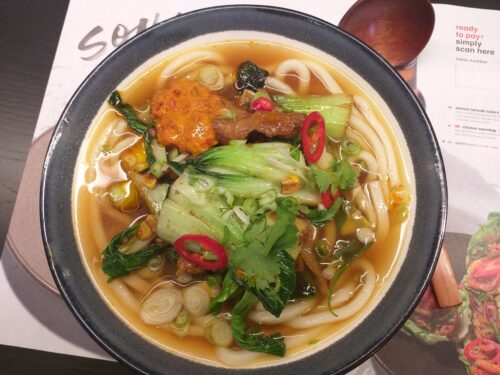 Speaking of companions, mine opted for the tantanmen beef brisket ramen, with Korean barbecue beef, half a tea-stained egg and kimchee. It was a fine looking dish, fragrant in all the right ways. The meat was good quality, the egg just a nudge runny in the middle (otherwise known as perfect) and the kimchee had all the crunch and spicy bite you’d expect. It was another winner. 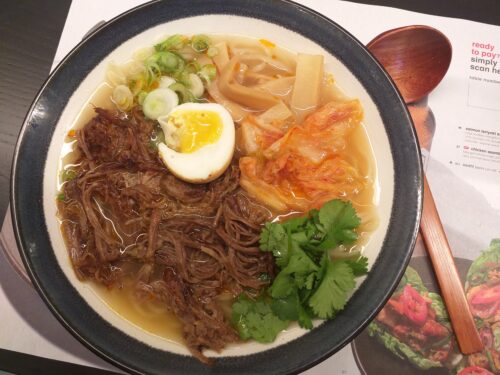 The service was friendly and knowledgable. Any questions we had about the food were answered cheerfully. The restaurant was busy, but at no point did we feel neglected as it can sometimes do if you’re somewhere busy.

We were fit to burst, but after a small break, I was ready to order dessert. Pudding is not something I usually think of getting from Wagamama, but I’ve since decided that was a mistake and something I need to rectify in the future. My companion opted for the chocolate and cherry kefir ice cream, a classic combination and one that didn’t disappoint. If I hadn’t have ordered my pudding, then I would probably have given the ice cream a good going over. 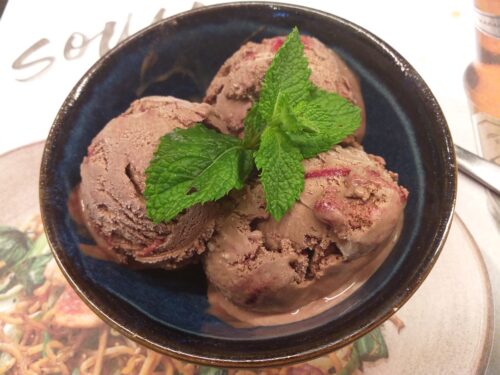 I’d very much enjoyed my meal thus far, but my pudding was about to change everything, but in a good way. I was intrigued by the smoked chocolate caramel cake, so I had to have it. I wasn’t sure what it would be like, but I was presented with a delicious vision of smoked chocolate mousse, salted caramel, crushed biscuits, chocolate fudge brownie, chocolate ganache and vanilla ice cream. It was a serious pudding, and a seriously good pudding at that.

Next time you’re at Wagamama, I implore you to leave enough room for the smoked chocolate caramel cake. In fact, I’m tempted to return just for one, or maybe two of those to myself! 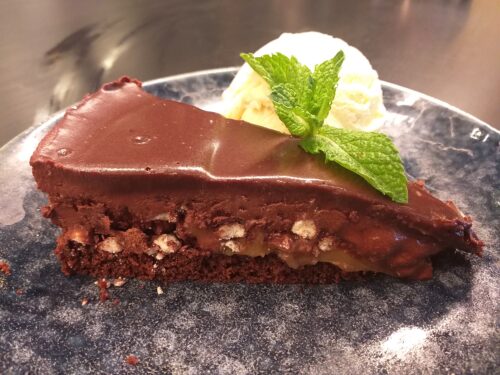 Although Manchester is well served by Wagamama, and I’m spoilt having one just a mile from my front door, it’s lovely to see a new restaurant popping up at Ashton Moss. Ashton is perhaps best known for being the home of Manchester’s only IKEA, but now the tram network has stretched outwards into Ashton, it feels very much accessible, and with the cinema there, it does feel like a destination family night out for those living thereabouts.

When we arrived, Wagamama Ashton Moss was filling up, but the time we left, three courses later, it was packed and with a fast moving queue outside. It’s clearly a popular place for Ashton locals to visit already – and they’ve only been open for one month! If you love Wagamama, then you know what to expect in terms of good food and service, if anything, I hope if you’ve read this far, that you might be tempted to try one of the three sublime courses I had that night. Go on, I dare you to try something new, I know I did and I didn’t regret it.

If you want to find out more about Wagamama Ashton Moss, or check out their menu, it’s all on their website.