The small boy is four and a half (he’s very keen on that half all of a sudden) and he’s very much like his dad. He’s starting to dress like him and when we go shopping points out things his dad would wear so he can wear them too. It’s all very sweet and part of growing up. This summer he’s fully embraced the belt – his dad is never without his belt, so the boy wanted something similar. His little fingers aren’t ready for a proper grown up belt, so we got him an easy to use velcro Easybelt. 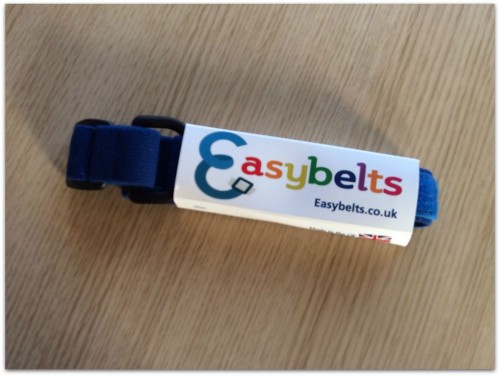 We chose this lovely blue belt, it’s in the school colours so he can wear it for school if he wants, but it also looks brilliant with his normal casual trousers.

The velcro Easybelts are so easy to use. You just put them through the belt loops on your trousers and pull the velcro end back and press against the other velcro bit. There are no fiddly buckles or anything to mess about with. He understood how it worked instantly, had no problems undoing it by himself and could take himself off to the loo quite happily and without our help. 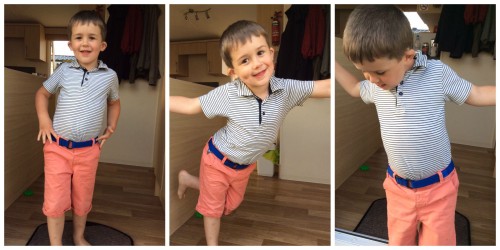 As you can see (Manchester’s next top model) he was pretty proud of his belt, which I think looks great with those shorts. He’s also worn it with jeans and other trousers and he cuts quite a dash. The belt somehow makes him look smarter and more grown up at the same time.

Easybelts have a huge range of belts for children, with different designs and motifs for boys and girls as well as unisex options. They also make belts for adults who may struggle with the tricky fastenings of normal belts (seriously, those canvas belts with the funny buckle – I have no chance!).

The velcro Easybelts cost around £6 and are easily washed and easy to use. The small boy is a big fan!

Note: We were sent the Easybelt free of charge for review purposes. All images and opinions are our own.