This week we’ve been playing a new game – I Saw It First! Jungle – A Family Spotting Game. It’s a puzzle game for people who love spotting animals, like a ginormous Dobble but a bit harder and just as much fun! 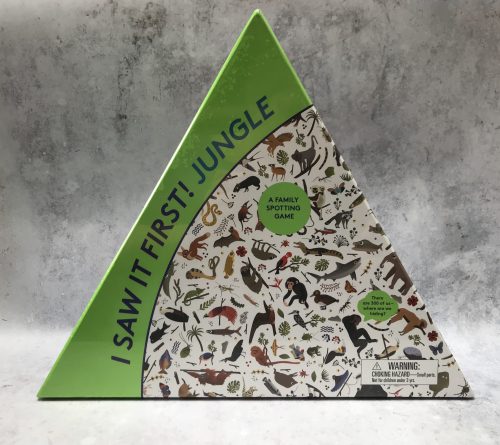 In I Saw It First! Jungle there are 300 jungle animals all over the double-sided board. Each of the pieces is printed on both sides, so no two games are the same because you can put the board together in many different ways.

The board is covered with all kinds of creatures, some are familiar, like the leopard or the hippopotamus, others less so, like the eyelash viper or the giraffe weevil. 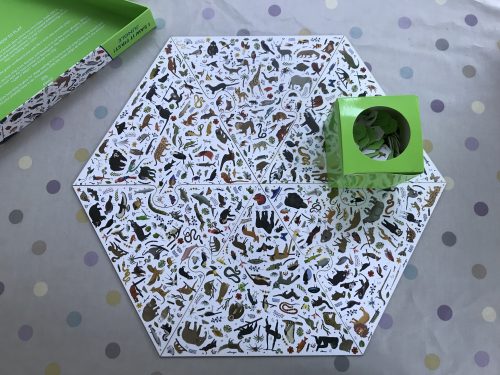 The game comes with a box to assemble and 300 hexagonal counters each with an animal on one side and the name of the animal on the other. To play you take a counter from the box and show it to the other players. When they say “go” everyone must look for that animal on the board. The first one to spot it shouts “I saw it first” and keeps the counter. You can play for as long as you like. The person with the most counters at the end of the game is the winner. It’s simple but brilliant.

Like I said, the games go on as long as you want. It’s really fun to try to spot the creatures on the board. There’s a good variety of different animals and lots to talk about. Ben knew a lot about some of the animals, birds and insects already and happily chatted about where some of them lived and what they ate as we searched the board for them. 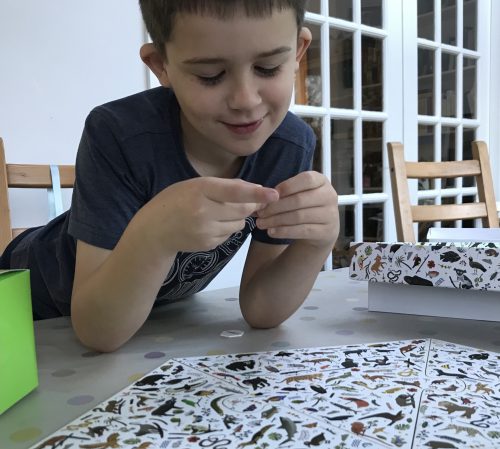 I Saw It First! Jungle comes in and eye-catching triangular box and features illustrations by Caroline Selmes. It’s easy to understand but addictive to play, and great fun for adults and children alike.

I Saw It First! Jungle costs £19.99 and it is available from high street shops, direct from Laurence King and online retailers such as Amazon.

Note: We were sent I Saw It First! Jungle for review purposes. All images and opinions are our own.