When I was a little girl nightwear was really boring and generic. It was plain or patterned nighties or pyjamas and that was about it. I think my little brother had a slightly better deal. By the time he arrived “character pyjamas” were just about available in the shops. No self respecting little boy would be seen at bedtime without his Spider-Man pjs.

My boy is no exception. He loves his character pjs and likes to just wear them to hang out around the house in, as well as for snuggling up in bed. The latest addition to his PJ collection is a lovely pair of Pip Ahoy pyjamas. These pjs are available in 59 out of the 88 Toys R Us stores across the UK. They are priced at £9.99. The Pip Ahoy pyjamas come in sizes sizes 2-3, 3-4, 4-5 and 5-6.

The boy is a big fan of Pip Ahoy and couldn’t wait to get into his pyjamas. The short sleeved pj top is a familiar picture of Pip and all of his friends from Salty Cove. The bottoms are a lovely blue with a Pip Ahoy badge on the hip. I really like the PJ bottoms as they are a skinny leg PJ which is a style I much prefer on my boy.

They were really comfortable and he snuggled down to sleep in them with no problem. They were easy for him to pull up and down when he went to the loo in the night and he looks so cool in them.

He’s had them a few weeks now and they’ve been in and out of the wash a few times and they still look as good as the first day he wore them, they’re great quality, well made and the colours are still vibrant. These Pip Ahoy pyjamas are a must for any Pip Ahoy fan who dreams of having adventures down at Salty Cove.

Note: We were sent these Pip Ahoy pyjamas for review purposes. All opinions are our own.

The lovely people who make the brilliant cartoon Pip Ahoy have given me a fantastic set of 12 Christmas Pip Ahoy! printables to share with you.

If you’ve not yet heard of Pip and his friends, Pip Ahoy! is a cartoon about Pip the puppy, and his friends including cute kitten Alba and adorable Alan the penguin in the seaside town of Salty Cove. You can catch up with Pip Ahoy! on Channel 5’s Milkshake and on Cartoonito.

This set of free Christmas Pip Ahoy! printables includes lots of festive pictures to colour in, as well as template letters to Santa and Christmas craft ideas. Lots to keep the little ones entertained throughout the Christmas period.

Don’t forget to join us for the Pip Ahoy! Twitter Party on 1st December, follow @PipAhoyUK and join in with the hashtag #ISpyWithPip to be in with a chance to win some prizes. You can download your free Pip Ahoy party pack here.

Your invitation is below… 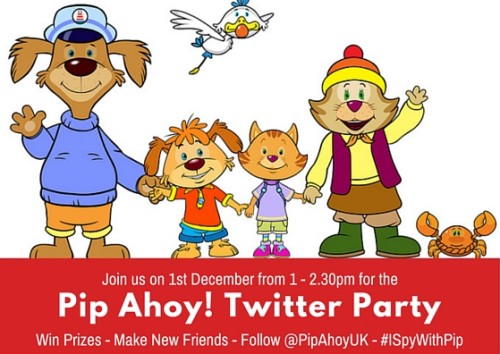 Don’t forget you can win your very own Pip Ahoy! Skippers Bucket Toy in my Christmas competition – it ends on 13th December 2015, click here to be in with a chance to win! 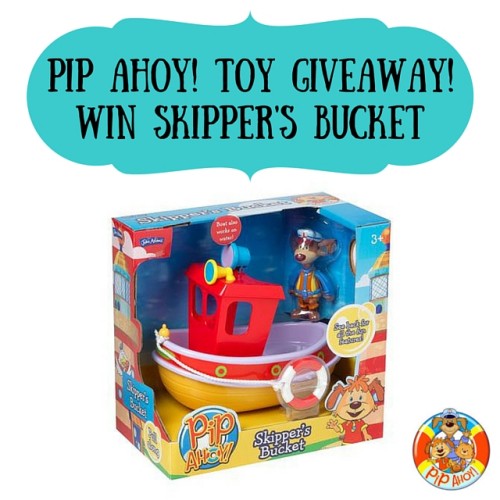 Earlier this week I had the chance to have a tour of the CHF Entertainment studio, they are the makers of the fantastic cartoon Pip Ahoy! Pip Ahoy is part of Milkshake! on Channel 5 and is also shown on Cartoonito. The studios are in a beautiful, historic and top secret location in Manchester, close to my home and accessible only through underground tunnels (might have made that last bit up). CHF Entertainment are the reincarnation of animation legends Cosgrove Hall who made iconic cartoon series such as Danger Mouse, Count Duckula and The Wind in the Willows (and literally hundreds more).

For those who haven’t yet seen Pip Ahoy! It is all about the adventures of Pip the puppy, and his friends including cute kitten Alba and adorable Alan the penguin in the seaside town of Salty Cove. Pip Ahoy! features the familiar voices of David Jason, Stacy Soloman, Teresa Gallagher and Jimmy Hibbert. Pip Ahoy! is aimed at pre-schoolers and my (nearly) 5 year old son loves watching it on catch up and gets really involved in the goings on at Salty Cove.

With the October half term approaching and Halloween creeping ever closer, I’m delighted to be able to offer my blog readers a set of FREE downloadable Pip Ahoy! Halloween Activity Sheets to help keep your little ones entertained, or to use to plan your perfect Pip Ahoy! Halloween Party!

Not only that, but I’ve also got nine brilliant pumpkin carving stencils to share with you, I think stencils are great, especially if you’re not confident about carving freehand. As well as the usual pumpkin faces, you can also carve your own Pip, Skipper, Hopper, Alba, Pasty and Alan characters – so much to choose from! 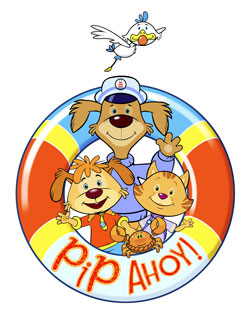 These free printables, stencils and activity sheets are brilliant for your little Pipsqueaks. Happy Halloween!