Now that the leaves have started falling from the trees, my slow cooker (or crockpot if you’re reading this in America) is really earning its keep. I love a slow cooker recipe, being able to throw something together in the morning  and come home to something hearty and warming in the evening is an autumn/winter life saver! This week I made a Ham Hock Macaroni Cheese using a ham hock I’d bought for just £3.50. I cooked it in the slow cooker, stirred it through some macaroni cheese, baked it in the oven and made my family very happy indeed. 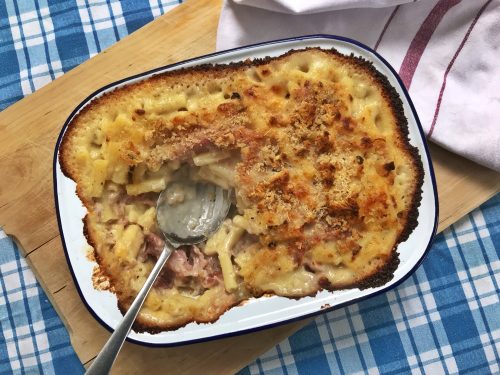 A ham hock comes into its own when you cook it for hours. You know its done when it falls off the bone. It’s insanely cheap and it often used to make ham and pea soup with. Just because it’s cheap doesn’t mean there’s anything wrong with it, it’s just needs long, slow cooking. I’m a bit obsessed with ham hocks these days, they seem like such good value and the boys seem to really like anything I make with them, like this Sticky Rosé Braised Ham Hock.

This Ham Hock Macaroni Cheese is the kind of thing you’d find being sold for £15 a portion in a hipster dive bar in a fashionably shabby part of town. It’s the kind of made ahead meal you could make for friends and family for a weekend feast. It’s hearty, it’s warming and it’s delicious. My family adored me when I put this in front of them. 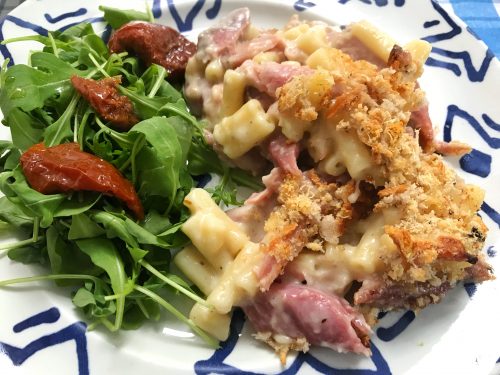 How to make Ham Hock Macaroni Cheese:
Put your ham hock in your slow cooker and pour over your coke or diet coke until it’s just about covered. Turn the slow cooker on high and cook for at least 5 hours, until the meat is falling off the bone.

Once your ham hock is cooked, take the meat and cap of fat off it and shred the meat with two forks. Discard the bones and fat, or give them to your grateful dog.

You will have probably enough meat to eke out two portions of this dish, but if you’re feeling generous like I was, then use all the meat in the one dish. If you want to be less generous (and the next time I make this, I’m going to be less generous), set aside half of the ham hock, dribble over a little bit of the cooking juices and freeze, ready to be defrosted next time you want to make this.

To make the macaroni cheese, melt the butter in a saucepan, once melted, tip in the flour and mix well with a wooden spoon. Mix until it’s a paste and then cook the flour out for a minute. Add a splash of milk and stir until it turns into a paste again. Keep adding milk in splashes and mixing until it starts to turn into a silky sauce. The amount of milk will vary, but I’d say you need at least a pint of milk.

Leave your sauce to bubble gently on the hob while you add 200g of pasta to another saucepan of boiling water. Cook the pasta according to the instructions on the packet.

While your pasta cooks, grate your cheese and add it to your sauce. Set aside 20g of the Parmesan to top your bake with. Stir, stir, stir your sauce and season with salt and pepper. I also like to add ground chilli flakes for a bit of a gentle kick, but you can leave that out if you prefer. Taste the sauce to check the seasoning; if it’s not cheesy enough for you, now is a good time to add more cheese. Now would be a good time to pre-heat your oven to 220°.

Sprinkle over the breadcrumbs and the remaining Parmesan cheese; pop it into the oven for 25 minutes, or until it’s brown and bubbly on top. Take it out of the oven and put to one side for five minutes. Serve with a big salad and crusty bread. 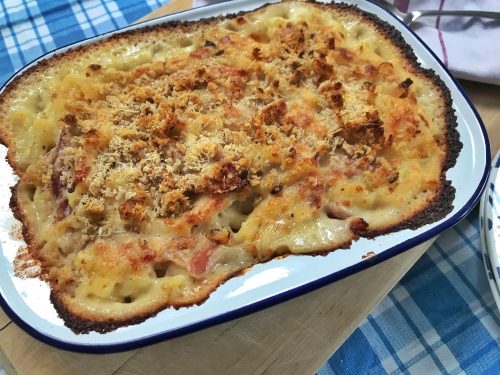 If you want to feed your friends and family something that’s like a big plate of hugs, this ham hock macaroni cheese is the dish for you. It’s a delicious, economical, hearty hug of a meal. 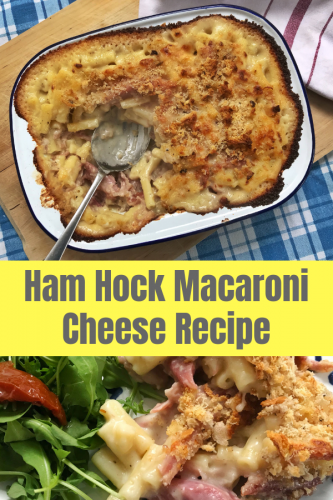