We were sent a selection of Jack Daniel’s Barbecue Sauce for the purposes of this post. All images and opinions are our own.

With barbecue season in full swing, I was sent a selection of Jack Daniel’s Barbecue Sauce to sample. I confess that barbecue sauce is one of my favourite condiments and I often have a dollop with my chips, or on a veggie burger.

I was sent the following sauces to try out: 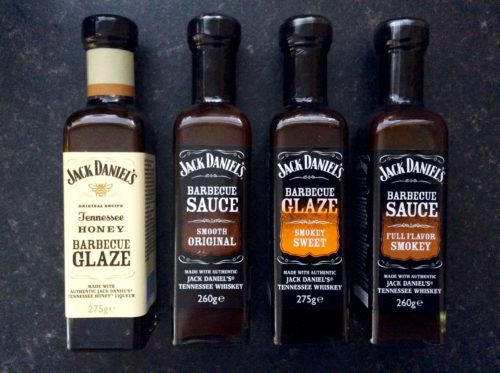 The Smooth Original sauce is a good quality standard barbecue sauce. It has the sweet and sour notes which make a good, well-rounded sauce. This is a good store cupboard staple and one you could happily dip your chips in.

The Full Flavor Smokey smells nicely smokey. It’s got a pleasing hit of hickory smoke but it’s not too overpowering. It has a slightly sweeter note than the Smooth Original and will add a smokey barbecue flavour to whatever you pour it on.

The Smokey Sweet barbecue sauce is for barbecue sauce fans who like a sweeter, stickier sauce. For me this is a slightly more American style sauce, but I really enjoyed the sweet, smokey flavour notes in the sauce.

The Tennessee Honey Barbecue Glaze is delicious. This is made with Jack Daniel’s Tennessee Honey Liqueur and is sweet and smokey with a big hit of salty soy. It’s very well-balanced and really hits the spot for me in terms of a good barbecue sauce. Use it to dip or pour, or you could use it to marinade chicken wings for the barbecue.

Jack Daniel’s barbecue sauces are available from most major supermarkets. For more information visit their website.