I’m not sure the name of the company who sell these at Just So, but if you’re going, they’re well worth tracking down and trying for yourself. If you’re not going to the Just So Festival, then you might as well make these at home, they’re almost as good as the original! I love the food at Just So, there are so many different food stalls to try, you could happily eat a completely different cuisine for every meal while you’re there. 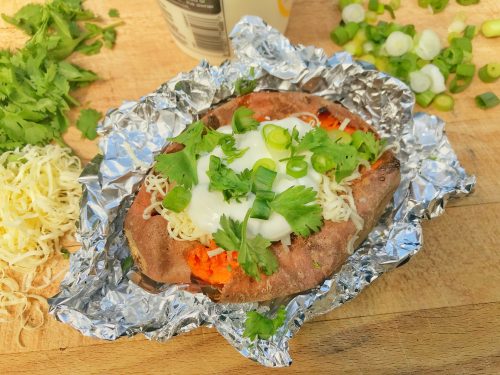 We usually bake the festival sweet potatoes in the oven, but you can microwave or BBQ them too if you want. They make a great lunch or a nice side with fajitas or whatever else you fancy.

How to make your Festival Sweet Potatoes:
Heat oven to 220°. Wrap your sweet potatoes in foil or put on a baking sheet. Sweet potatoes tend to leak a sticky fluid when they bake, so this will save you having to clean your oven afterwards. Bake for about an hour, or until the potato is soft all the way through when you poke it with a knife.

Once baked, slit the top and open them up. Add as much finely grated Cheddar cheese as you like, not too much though. Dollop on some sour cream and sprinkle over with spring onions and coriander, then eat. It’s as simple as that. 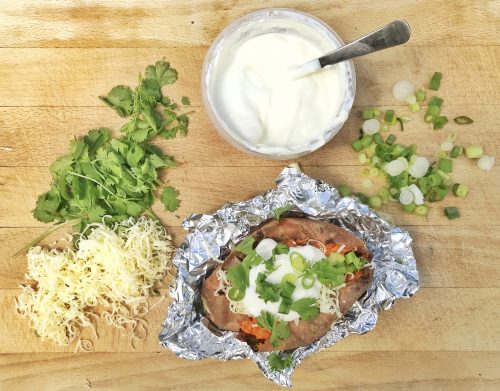 I like a lot of spring onions and coriander; but if you’re catering for a crowd you can just put the toppings in bowls and everyone can help themselves. These are great for a party. I like to serve them in the foil as this saves on washing up too! 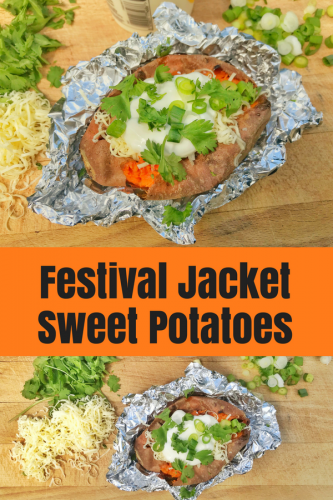 One of my favourite things about summer is getting the barbecue out, knocking up a few salads and inviting some people round for a feast. It is casual dining at its best. There’s not a lot in life that’s better than relaxing with a glass of something chilled while the men debate about when to put the steaks on the barbecue.

As a veggie my barbecue experience is often a bit meh. I usually have barbecued corn on the cob, a pile of nice salad and a veggie burger, which is fine, but my meal is usually cooked first so they can get on with the important business of burning meat, so I do feel a bit left out of the main scoffing. Moan moan moan!

What I do love is a nice barbecue sauce, I actually prefer a barbecue sauce to a dollop of ketchup. Barbecue sauce seems to have really come on in leaps and bounds these last few years, with lots of new recipes and flavours flooding the market. About 6 years ago I first discovered the Jack Daniel’s Barbecue sauces, at the time I think they only did one, but it was by far the nicest one I’d found. These days there are a lot more sauces on the market, but I was sent the Jack Daniel’s Tennessee Honey Barbecue Glaze to try out.

We waited until the sun came out, and by ‘eck the sun came out last week. So we invited some people round. I knocked up some salads and him indoors got busy burning some meat. I casually left the bottle of Jack Daniel’s Tennessee Honey Barbecue Glaze on the table next to the ketchups and relishes to see what people thought. 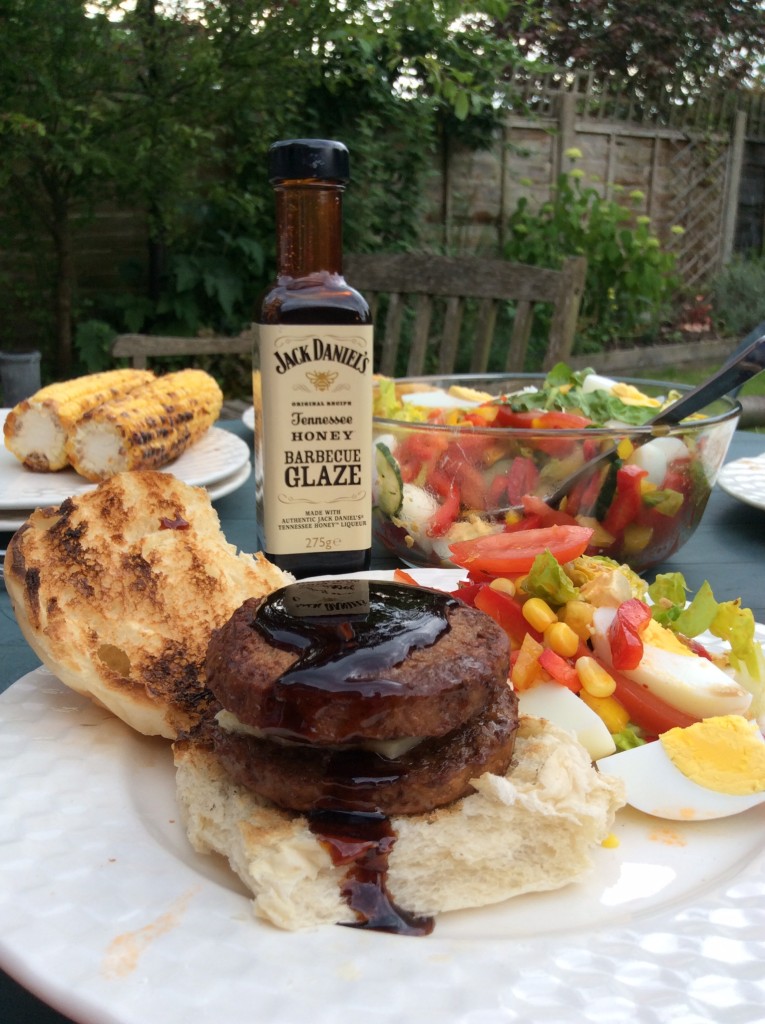 I was first to give it a try, mainly because my food was ready about an hour before everyone else. I liberally dosed my veggie burger with the Jack Daniel’s Tennessee Honey Barbecue Glaze and tucked in.

The Jack Daniel’s Tennessee Honey Barbecue Glaze is based on the Jack Daniel’s Tennessee Honey liqueur, which I’m a big fan of, the drink is sweet and smooth so I suspected the sauce would be good too. The glaze is slightly runnier than a traditional barbecue sauce, sweet but not too sweet, with a little gentle barbecue heat. It was so good I poured some more on my plate to dip my burger in.

The barbecue carnivores soon took an interest, when their burgers were ready they tried it too, and did exactly the same thing as me, adding extra to their plate for dipping purposes. Even hubs who doesn’t really like barbecue sauce went back for seconds. This is a sauce which will definitely find its way into our shopping trolley again.

You can marinate chicken or meat in it prior to barbecuing, but we didn’t, not this time. I reckon it’d also be pretty good in a bacon butty or to dip your chips or wedges in. It’s a very definite thumbs up from us!

Note: We were sent a bottle of Jack Daniel’s Tennessee Honey Barbecue Glaze free of charge for review purposes. All images and opinions are our own.