With the barbecue season in full swing we were optimistically sent some fresh Ambu Tree Marinades to try; then the heavens opened and it rained solidly, Noah’s Arc style for days. Thankfully you don’t really need a barbecue to try the marinades out so we got stuck in.

There are three different flavours of Ambu Tree marinade; Mild Tandoori, Spicy Tandoori and Chinese Five Spice. Ambu Tree use freshly roasted and ground spices which really pack a flavour punch, they are also gluten and dairy free and contain no food colouring or harmful additives. The marinades are chilled, so need to be kept in a fridge, but they generally have pretty long dates on them and will keep for a few weeks in the fridge.

The pots look small, but they do go a long way, they say each pot is enough for 4-6 people and I think that’s about right. 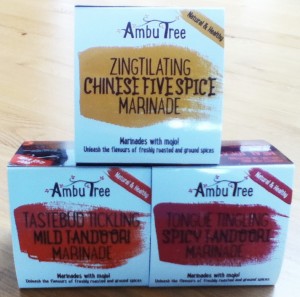 To use, I sliced up a large chicken breast, put it in a plastic box, added about two teaspoons of the mild tandoori marinade and coated the chicken. I did the same with the spicy tandoori marinade (we wanted to do a taste comparison). Because I’m veggie I just coated a Quorn fillet with each and I put all the boxed chicken and Quorn in the fridge for a few hours to, erm, marinade.

I cooked some in my griddle pan, the others I fried in a drop of oil. You could easily bake or barbecue them too. I served the tandoori chicken and Quorn in pitta bread with salad and homemade raita. 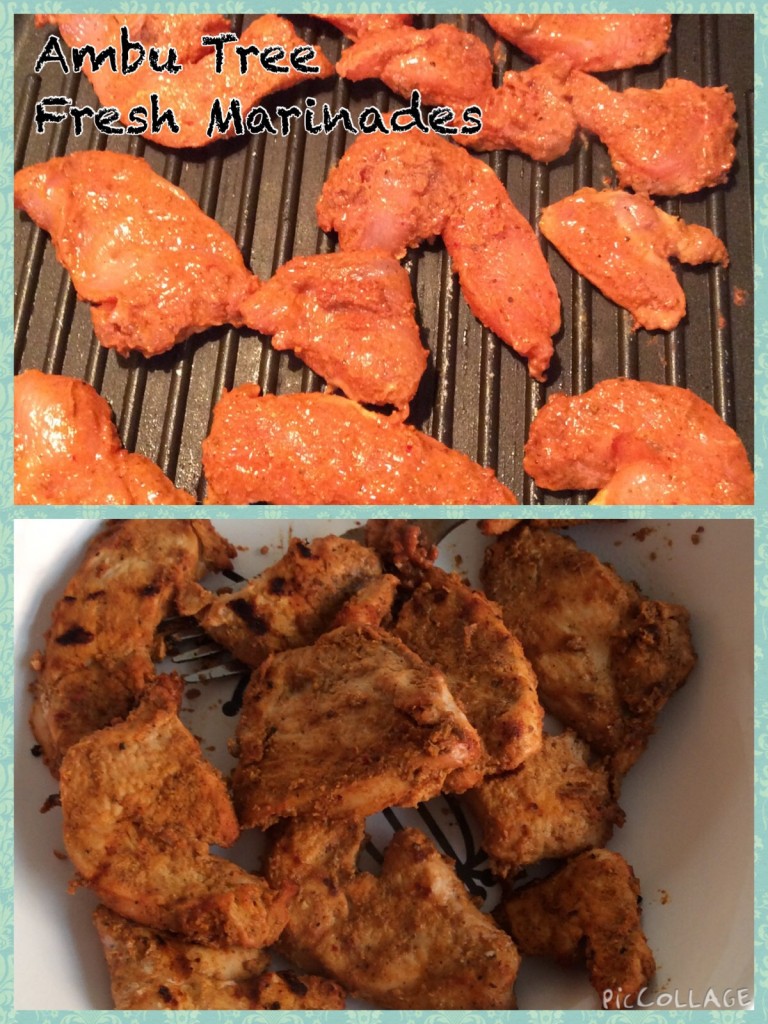 The mild tandoori was a really big hit, really flavoursome, there was some spice but it was a gentle, warming heat. The small boy (he’s 3) loved it and cleared his plate. The bigger boy (he’s 39) who is a spice junkie, preferred the spicy marinade. I enjoyed them both, but the mild was definitely my favourite. It was like no home marinade I’ve ever had, it tasted really authentic and complex, but also really healthy too.

I really enjoyed the Chinese five spice marinade. It had a beautiful, deep, authentic flavour, I imagine duck would be fantastic marinaded in this. It wasn’t spicy hot, it was a wonderful blend of flavoursome spices which we all enjoyed.

The Ambu Tree Marinades were a bit of a revelation to me. I’ve tried a few similar mass produced marinades before but they lacked a bit of marinade mojo and were a bit gloopy and artificial. These Ambu Tree Marinades are so packed full of flavour and fresh tasting, a little really does go a long way. The little pots are available from their online shop at £3.85 per pot. They’re gorgeous and I hope they’ll find their way to my local deli soon.

Note: I was sent the Ambu Tree Marinades for review purposes. All images and opinions are our own.