Each July thousands of cheese producers and retailers from across the world descend on the sleepy market town of Nantwich in Cheshire to take part in the International Cheese Awards. The awards are part of the Nantwich Show, but trade day and judging takes place the day before the gates are opened to the public. I’ve been going for four years now, and judging for the last three. It is the highlight of my foodie calendar, but what did I judge at the International Cheese Awards 2017 and who won? 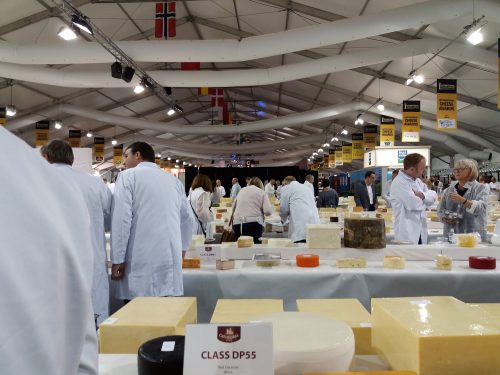 The judging day starts early, but there’s plenty of coffee and lots of really interesting people to talk to. I arrived early, just as they were opening up the cheese pavilion and was first in line to collect my judging pack. Taking the chance, I had a quick wander around to have a look at some of the 5685 entries and then settled down for a coffee. I found myself sat next to Jill Allen from the The Tillamook County Creamery Association in Oregon. Jill is lovely and we had a good chat about cheese (what else?) and her plans to visit the Cheddar Gorge before she goes home to America.

The judges were briefed and we made our way to the judging tables. I was in a judging team with retired cheese maker David Slater and Sarah De Wit, Product Development Manager for ASDA. Both were very knowledgeable and I like to take the opportunity to learn what I can about cheese from my fellow judges. 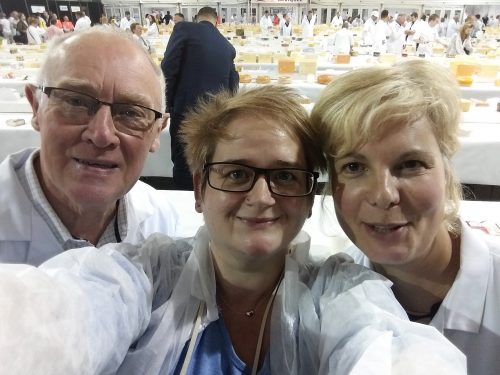 Between the three categories judged we sampled 41 different cheeses, which was not a record breaker, but still a fair amount of cheese to eat in one sitting. Judging over, I retired to the press tent for a sit down and a cup of tea and to compare notes with some of my fellow press judges. We just had time for a quick look around some of the trade stands in the cheese pavilion before lunch. And yes, we did eat some more cheese. 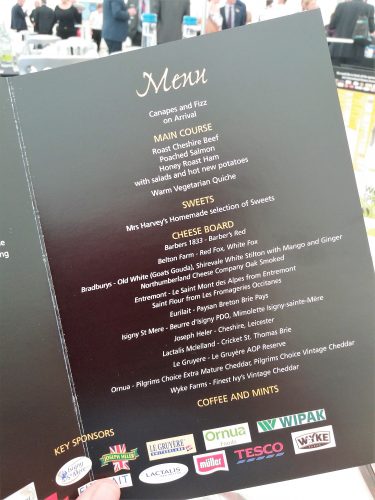 Lunch at the International Cheese Awards is always a treat. After a feast of cheese, the lunch of excellent salads, thick slices of beef, ham, poached salmon or veggie quiche is very welcome. Pudding at an event which celebrates all things dairy is as cream-filled as you’d expect; with sherry trifle, excellent pavlova, chocolate roulade and a huge dish of fresh strawberries. It’s hard to know what to choose (so it’s best to have a little of each). You should save a little room for the best cheese board you will find anywhere in the world, this is the International Cheese Awards after all.

After lunch, the winners of the retail classes were announced, along with the International Cheese Awards 2017 Supreme Champion, which was the Roquefort Papillon Révélation from Bradburys Cheese. It’s available from Waitrose if you fancy tracking down this wonderful blue cheese. 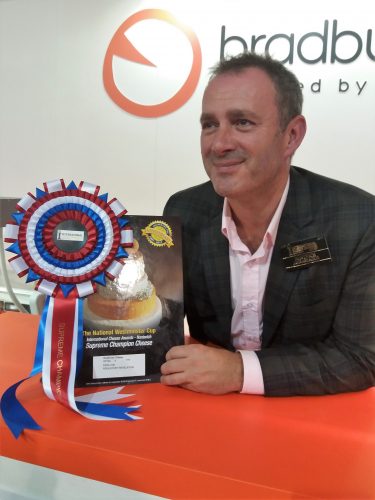 It was a wonderful year for the International Cheese Awards 2017. Each year I discover some new cheeses and learn more about cheese tasting. I love it. I know being a cheese judge is something of an honor bestowed on the few and that I was in incredibly knowledgeable and gracious company, for which I am grateful.

This year was the 120th anniversary of the International Cheese Awards. Today (26th July 2017) the doors are open to the public; complete with cookery demonstrations from celebrity chefs including James Martin, Sean Wilson and Will Holland. If you can’t make it to the cheese pavilion this year, then put it in your diary for next year. It’s an unmissable event for cheese lovers and food enthusiasts!

For more information about the International Cheese Awards 2017, visit their website.