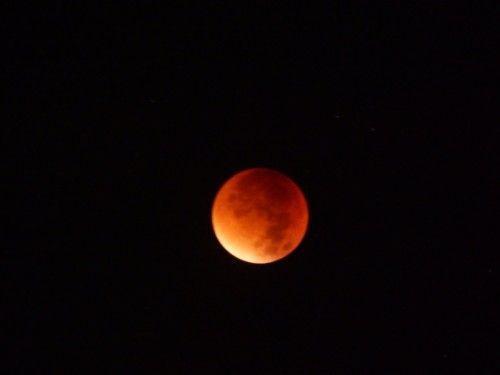 This is the super blood moon eclipse which happened this week. I dutifully set my alarm for 3am and grumpily got out of bed to see this rare eclipse. I tried to take some snaps with my ipad but it was useless, but I had my proper camera on hand and took this. It was my first ever attempt at a detailed picture of the moon, and I was pretty pleased with the result.

There was no special trick to this, I leant out of my bedroom window, pointed my camera at the moon and zoomed in as far as I could. I was wobbling the camera all over the place, so I pulled on the neck strap on the camera and held it taut, it worked briefly and I fired off a few shots before I got the shakes again. Next time I would use a tripod and maybe a slightly better camera.

I use a Nikon Coolpix L820, which isn’t a DSLR but it’s easy to use and I’ve managed to take some pretty nice pictures with it.

So that’s my super blood moon. Not bad for a half asleep grumpy woman with the shakes.