Review: Doctor Dolittle The Musical at The Lowry

Every year The Lowry in Salford Quays puts on a big family show. It’s not always Christmassy, but it’s always a good alternative to the traditional Panto. This year The Lowry are playing host to Doctor Dolittle The Musical and we went along to see if he really could talk to the animals.

Based on the popular 1967 film with Rex Harrison; this spectacular new stage show stars Mark Williams as the eccentric Doctor. In Doctor Dolittle, join him and his human companions and his exotic menagerie of animal friends on an extraordinary adventure to find the Giant Pink Sea Snail. With help from the Pushmi-Pullyu and his trusty sidekick Polynesia the Parrot, the good Doctor teaches us not only to talk to the animals but to listen to them as well! 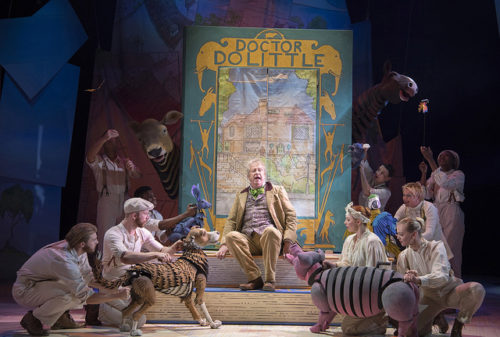 Fans of the original film, or the Eddie Murphy re-make will spot a few changes to the original story, but the main characters and the most favourite songs survive. In this production there is more of a focus on Doctor Dolittle’s relationship with the animals rather than him falling in love. Matthew Muggs played by Patrick Sullivan instead falls in love with Emma Fairfax (Mollie Melia-Redgrave).

The production is lush and visually striking, with a versatile paper set designed by Tom Piper. Each scene is brought to life by the animal puppets. There are 39 animal puppets and each one moves authentically and you really start to see some of them as actual animals rather than puppets, especially Jip the dog who is just wonderful. There are two giant puppets – the Giant Pink Sea Snail and the Giant Lunar Moth who are especially well done. At the end the moth flutters over the front few rows holding Doctor Dolittle in its legs, it’s very well done.

Mark Williams as Doctor Dolittle is warm and just crotchety enough. He doesn’t dominate the stage, but gives the animals the space to shine. Matthew Muggs (Patrick Sullivan) is a charming, engaging everyman, whilst Mollie Melia-Redgrave as Emma Fairfax is by far the strongest vocalist in the show and leads us through a procession of songs.

Little Tommy Stubbins; the boy who escapes from the orphanage to go on a grand adventure with Doctor Dolittle; is ably and enthusiastically played by six young boys. I think Thomas Ryan played Tommy on the night we attended and he is someone to watch out for in the future.

Vicky Entwistle voices and is the co-puppeteer for Polynesia the parrot. It’s a large part but I found myself drawn to watching Vicky instead of Polynesia, which was quite distracting. Doctor Dolittle also stars Brian Capron as both Albert Blossom and Straight Arrow. As Albert Blossom (the circus owner) he was brilliantly bawdy and it took a moment for me to recognise him. I really did enjoy the colourful circus scenes which were a real highlight. 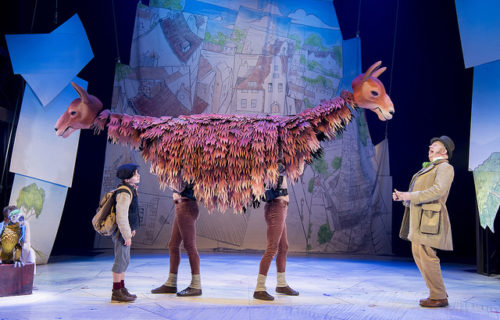 I feel I must mention the Ensemble cast, who were superb. They really helped to move the story along and were all lively, engaging and great singers and puppeteers.

The production contains 24 songs, some of which you might remember from the films (Talk to the Animals; I’ve Never Seen Anything Like It; and My Friend The Doctor). Doctor Dolittle is two and a half hours long, including a 20 minute interval; there are a couple of parts where the action really slows, which is a shame in an otherwise colourful show.

Doctor Dolittle The Musical is a joyful, colourful, all singing and dancing family show. Fans of the film would really enjoy the musical; and as Albert Blossom would say, you’ve never seen anything like it in your life!

For more information about Doctor Dolittle The Musical, and to buy tickets, visit the website.

Check out our run down of family theatre shows in the region this Christmas.

We were invited guests of The Lowry, all thoughts and opinions are our own.

Like Loading...
This entry was posted in Theatre & Entertainment and tagged Doctor Dolittle, Doctor Dolittle The Musical, Mark Williams, Salford Quays, the lowry. Bookmark the permalink.