This spring, catch the UK Tour of Running Wild, based on the novel by Michael Morpurgo and adapted for stage by Samuel Adamason. Running Wild is coming to The Lowry, Salford Quays from 18-22 April 2017.

Michael Morpurgo’s novel, Running Wild, is loosely based on the true story of a girls survival of the 2004 Tsunami. This wonderful and inspiring story is brought to life in this award-winning production. Originally produced by Regent’s Park Theatre and Chichester Festival Theatre; this epic production comes complete with spectacular life-size puppets and tells an emotional and moving story of love, loss and loyalty and of living for the moment. 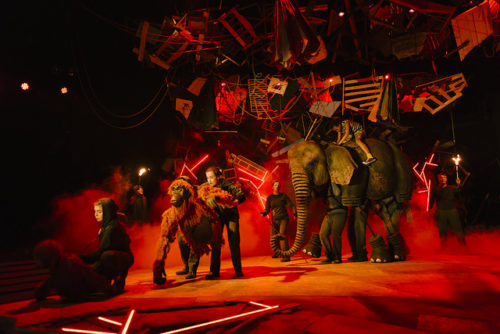 Running Wild is the story is of a girl called Lilly, who, whilst on holiday with her mother in Indonesia, takes an elephant ride.  During the ride, Oona, the elephant, suddenly becomes anxious and runs from the beach deep into the jungle.  With Lilly on her back, they escape moments before the tsunami hits the island.  Miles from civilisation, at first there’s wonder, discovery and tree-top adventures with the orangutans. Eventually her thoughts turn to her mother left behind on the beach, and wild tigers prowl, and hunger hits, Lilly must now learn to survive the rainforest.  And then the hunters come… 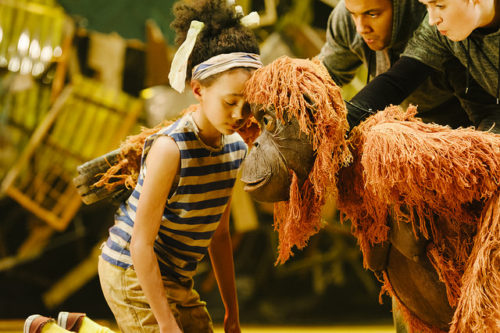 Michael Morpurgo is the former children’s laureate and the acclaimed author of War Horse. He was inspired by the real-life story of Amber Owen, who was on holiday in Phuket with her mother and stepfather in 2004. When she went on an elephant ride along the beach, the girl noticed the elephant was trying to pull away from the receding sea water.  “He ran away and, as the water came in, I was safely on his back.  He saved my life.”

When he read Amber’s story in the newspaper, Michael Morpurgo said it was the one bit of hope amid the devastation of the 2004 Boxing Day tsunami.  The production supports the Born Free Foundation’s global elephant conservation projects.

This production of Running Wild is suitable for ages 6+ and has a running time of 90 minutes with a 20 minute interval.