Last weekend we took the small boy to see Mr Popper’s Penguins at The Lowry in Salford Quays for a Christmas treat. The theatre production is based on the novel by Richard and Florence Atwater, and has been adapted for the stage by Pins and Needles Productions.

Mr Popper’s Penguins follows the story of Mr Popper, a painter and decorator by day. He dreams of Antarctic adventures and lives with his wife, living a normal, everyday, average life. One day he is astonished when a packing crate arrives on his doorstep, out of which waddles a penguin who he names Captain Cook. Alas Captain Cook is lonely and he is sent a mate to cheer him up – Greta the penguin from London Zoo. Soon the inevitable happens and Mr Popper’s house is filled with baby penguins; Popper and his wife, struggling to keep up with their demands for fish hatch a plan to get the penguins to help pay their way – by performing on stage! 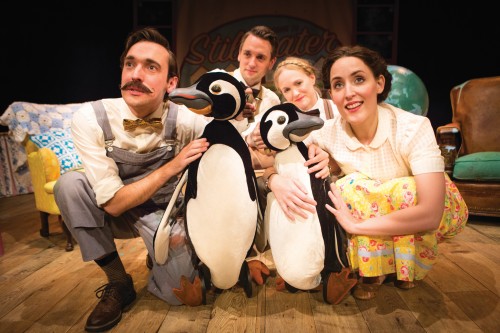 This musical adaptation of Mr Popper’s Penguins is packed full of original songs and puppetry which bring life to this remarkable family of performing penguins. I was absolutely captivated by the show, and the small boy was giggling away at the antics of the penguins. Mr Popper’s Penguins was lively and engaging, lots and lots of fun and the show just flew by.

Using penguin puppets and a remarkably adaptable set, the cast of Mr Popper’s Penguins bring the story to life, giving each penguin a unique personality, to the point when collectively our hearts broken for the lonesome penguin Captain Cook.

The songs throughout were really catchy and fun, and had the boy wiggling and jiggling in his seat along with the music. There wasn’t much audience participation throughout (this isn’t a panto), but the penguin dance routine at the end which the audience are invited to join in with is marvellous. The small boy insisted we waddle our way home afterwards and is still busting penguin moves days later!

The show is suitable for children aged 3+ and is about 55 minutes long. The small boy, who is 5 gave this a very big thumbs up!

Mr Popper’s Penguins is on at The Lowry, Salford Quays from Thursday 10th December 2015 to Sunday 10th January 2016. 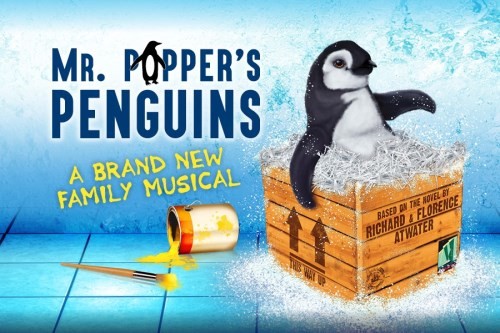 Like Loading...
This entry was posted in Theatre & Entertainment and tagged media city, Mr Popper’s Penguins, Salford Quays, the lowry. Bookmark the permalink.